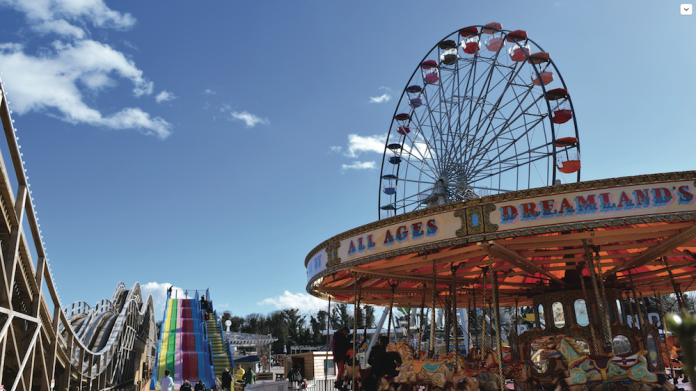 Dreamland Margate has opened another two new thrill rides in time for the start of the school summer holidays next week. The Pendulum and Pinball X come not long after family rides Up, Up and Away and Soaring Seagulls were unveiled to the public in May.

In total, nine new rides will be at the seaside amusement park over the summer season, with a further five new attractions set to join the four already open.

“Dreamland has a packed line-up of new ride openings, entertainment and festival fun planned for the summer. “There’ll be something for everyone as well as a packed programme of festival fun including The Circus, crazy golf, dog shows and a rich variety of music and entertainment throughout the whole of the summer.”

The Pendulum echoes the dynamics of the popular Mary Rose pirate ship ride that was a popular staple of Dreamland’s line-up in the 1990s.

The ride’s gondola has capacity for 16 people at a time, with an innovative ‘half- moon’ configuration allowing a family of four to ride in the same row side-by-side.

Pinball X is a high-impact coaster with a retro pinball theme, similar to the highly popular Magic Mouse that drew crowds to the amusement park throughout 2017.

Half way through the ride, the four-passenger coaches spin and whirl with gravitational forces and inertia, allowing each visitor the chance to enjoy a different ride every time they go on it.

More rides are set to be opened, with the Dreamland Drop Tower being tested ready for the holidays.

Described as “an adrenaline fueled ‘shoot up and drop’ tower”, the ride will rotate 360-degrees in order to give a panoramic view of Dreamland and the Margate seafront.