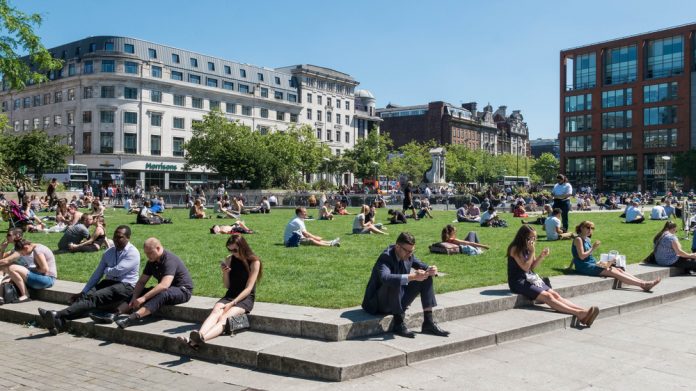 After winning the Chief Constables Citizens Award for making its Manchester city centre location “one of the safest” in Piccadilly Gardens, Admiral is looking to relocate to greener grass on the other side of the popular retail square.

The grass is greener on the other side of Manchester’s Piccadilly Gardens for Luxury Leisure, with the operator gaining a recommendation of approval to move its Admiral AGC from the current location at City Tower to a larger site across the square.

Luxury Leisure is “keen to strengthen its presence” within Piccadilly Gardens, which has “proven to be an attractive location for the business with customers and visitor accessing the slots throughout the day and evening”.

The operator has also become something of a business community leader in the area, winning the Chief Constables Citizens Award in 2015 for making its AGC “one of the safest locations” in Piccadilly Gardens. In a letter to the Manchester City Council’s planning committee, Luxury Leisure’s head of risk and compliance Mark Thompson stated the accolade is one the operator has “made great efforts toward and succeeded in maintaining”, providing details of how the operator has led by example in the local business community.

“We operate a team of door supervisors at the Parker Street venue and have done so throughout my tenure and for a number of years prior to that”, wrote Thompson. “They control access to the venue during evening and night opening hours. This is a voluntary measure by the company deployed as a matter of good practice, and is not a requirement of the licence for the premises, and nor has it been requested by others.

“Almost three years ago, as part of a number of security enhancements, we introduced the use of barriers at the front of our premises as a measure to assist the police and ‘design out crime’,” he continued. “This approach was copied by several of our neighbours including the Spar and Paddy Power.

“At my most recent meeting with members of the Manchester Business Crime Reduction Partnership and officers from the Piccadilly Gardens neighbourhood policing team I made very specific enquiries as to whether there were any issues relating to crime or anti- social behaviour (ASB) that in any way involved our venue,” Thompson added. “The resounding response was that there were none.

“In short, I consider our operation in Piccadilly Gardens to be a fine example of a successful partnership approach to local issues of crime and ASB,” he concluded. “We consider ourselves to be a responsible and engaged member of the local community, fully invested in efforts to make the Piccadilly Gardens area a safe and pleasant environment for residents and visitors alike with a range of attractive, modern leisure facilities such as ours, heavily regulated and professionally run.”

As well as making a strong case in terms of safety, Luxury Leisure made sure to explain how its new AGC will perform “a positive economic, social and environmental role,” employing “25 staff on a permanent basis”, with employees and visitors of the new venue also making “further contributions to the local economy through first occupation expenditure”.

The operator’s application will go before the council on 28 June, when a final decision will be made.