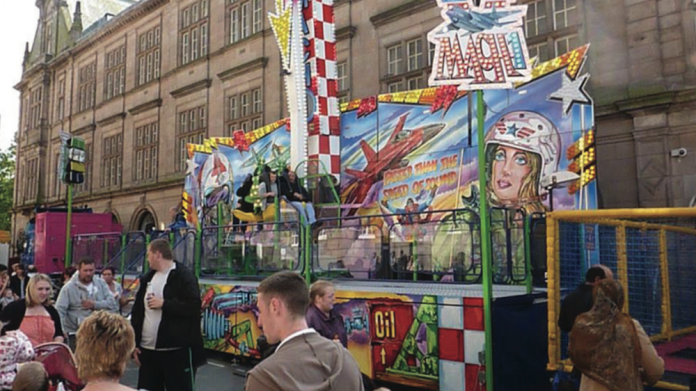 After months of trying to work with the council on a solution to keep Preston’s Whitsuntide Fair in the city centre, the Showmen’s Guild has expressed its frustration that the out-of-town Moor Park will host the historic event.

Secretary Leesa Beckwith said a letter had been sent to the Guild stating that the showmen’s attraction had outgrown the city centre,and since September showmen have been appealing to the council to honour the Royal Charter given to the city centre fair by King Henry II in 1199.

“This is scandalous. This fair has a Royal Charter going back centuries and councillors just think they can tear that up,” said John Silcock, whose family have been regulars at the fair since the 1930’s.

“What’s even more disgusting is the Showmen’s Guild has been trying to get a meeting with them to talk about this for months and they’ve been avoiding us.”

Preston City Council have maintained their position that the out-of-town Moor Park is the best place for this year’s Whit Fair, however many of the events regular operators are threatening to boycott the new venue on 26-29 May, claiming decreased footfall could lead to losses.

“Some years we just about break even in the city centre if the weather isn’t good,”continued Silcock.

“There are three other fairs on Moor Park every year and we know they are not as well-sup- ported as the city centre. Not by a long chalk. So, from what I’m hearing,the Whit Fair might only be about a quarter of the size it would have been.”

In an attempt to compromise with the council on a city centre fair,the showmen had offered to create an overspill of stalls on to a council-owned car park,but even that was rejected. “It’s very sad,”said Kirk Mulhear,chairman of the NorthWest Showmen’s Guild. “We all know that on a Bank Holiday Preston is like a ghost town. But when the fair is on it’s buzzing. Shopkeepers want us there and so do the public.But unfortunately the council don’t. I’m sure they will miss us.But what can we do?

“We know the strength of every fairground location and it will be financially less viable for us on Moor Park. So inevitably some people will make the judgement that they can’t afford to go there and find somewhere else for the Whit weekend.”

Silcock estimates owners of the bigger attractions could spend at least £2,500 in fuel, transport and staff costs for the four-day fair, on top of the rent to the council.

“It takes a lot to break even,let alone make a profit,” he added. “Going to Moor Park where the crowds are smaller means there is every chance, with a bit of good old British weather,that we could be out of pocket.

“We have tried so hard to get the council to see this,but they have steadfastly refused to even meet us unless we agree first to move to Moor Park. They have had a ‘take it or leave it’ attitude.

“Some of the rides and stalls will reluctantly go because they were depending on this for Whit weekend. But no-one really wants to go there.

“The people of Preston want the fair in the city centre, the local shopkeepers do because it boosts footfall on the Bank Holiday weekend.But for some reason the council want to push us out of town – a fair which has been going on at its traditional venue for 200 years.

“We are just hoping that the people of Preston will kick up a fuss, tell their councillors how they feel and try and change their minds for next year. But we aren’t holding our breath.”

Whitsuntide Fair’s move out of Preston city centre breaks a tradition of 800 years,the last 200 of which have included amusements. The fair also used to benefit from traditional Whit walks through the town centre, which would bring in crowds to the showmen’s attractions. Last year,the walk had to be scaled down because of the building work. This year, it is feared the fair will be further eroded due to its out-of-town relocation.