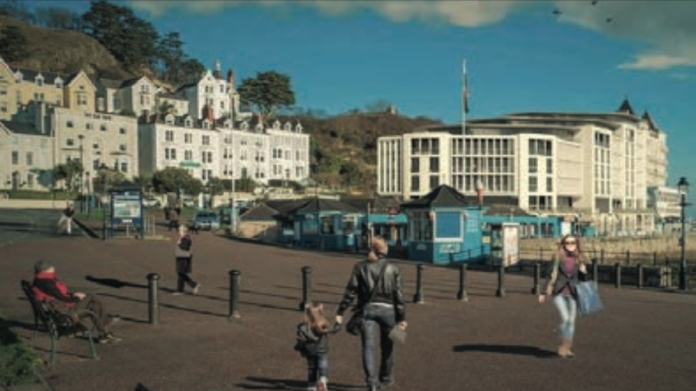 The Welsh Government will not call-in controversial plans for Llandudno’s new pier pavilion,with the lack of intervention described as “a sad day for Llandudno” by pier owner Adam Williams.

The director of North Wales leisure group Tir Prince was “astonished” at the decision as there’s “nobody for this proposal whatsoever”, suggesting Tir Prince “will be looking at how much to invest in the future of Llandudno” if the proposals continue to progress.

Listing the Victorian Society, hoteliers, the Wales Tourist Board, the Tourism Alliance and the chamber of commerce, Williams’ outlined the weight of opinion against the plans to turn the pier pavillion site into apartments and a restaurant, which he believes will undermine the very essence of Llandudno.

“I think Llandudno and that location isn’t for apartments. We’re in a Victorian theme park, if you like,and it’s all holiday based hotels,” he explained. “For instance, Rhyl was very similar to Llandudno,and then they started turning hotels into apartments and that led to the demise of Rhyl. The occupants of the apartments are often transient, and you find these high end apartments are bought by investors who never actually set foot in the building. People come to Llandudno because it’s a one off Victorian bay, and we spend lots of money to keep it that way, the whole facade.

These proposals are for a very modern block of flats right on the listed, iconic, Queen of Welsh resorts pier – at the very entrance to the pier. If you wanted to put something where it shouldn’t be, this is it.”

Williams added that “even the Design Commission for Wales” commented on the unsuitability of the plans, but the Conwy County Borough Council’s planning department has chosen not to acknowledge them”. He raised the fact that the project developer’s planning advisor had previously been the head of Conwy’s planning department, and had given “everyone currently in the planning office a job”.

While the Welsh Government’s decision is a blow to Llandudno’s future, Williams explained there are still some hurdles for the developer to overcome before the resort’s nightmare becomes reality. However, if plans stay on course,it could mean a change of focus for Tir Prince.
“What we’ll have to do is make the most of a bad
thing,” concluded Williams. “It may be that we decide as a company that we’ll invest elsewhere because of the uncertainty this building could put on Llandudno as a resort.”