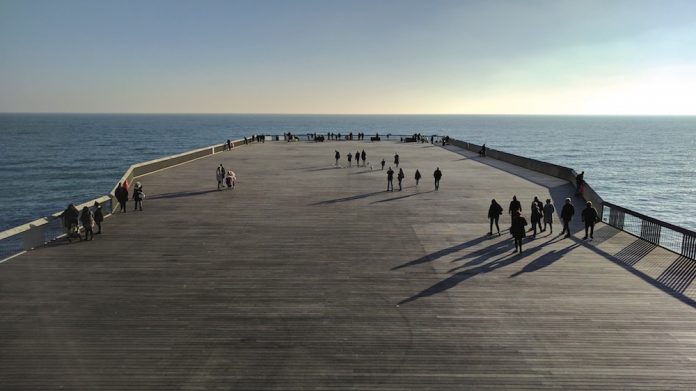 Less than six months ago, Hastings Pier fell into the hands of the administrators. Not surprising really when the architectural gem of 2017 – it won the coveted Stirling Prize – had little to bring in regular income to ensure its commercial viability. Actually, it had virtually no commercial facilities at all, bar a list of money making ideas from the well meaning charity group that oversaw it. But good intentions deliver nothing in the business world, and the pier went bust. Yet a revived group representing the community shareholders, the Friends of Hastings Pier, haven’t given up hope; it is trying to raise £1 million to stay in the game. Unfortunately, by Tuesday of this current week.

“What the feck: really? You cannot be serious?” When the local news came into the office that the revived community group, the Friends of Hastings Pier, had sent out an appeal to raise £1 million to keep their hat in the ring to run the operation, the response was one of, putting it less industrially, disbelief.Not just because the community role had been pretty prominent at the time of the demise of the pier last November, but more because nothing like £1 million had been raised in the six months since,so in six days, it’s a somewhat naïve call to arms.

It would be fair to say that of all the crazy things that happen in the amusements industry each year, the plight of Hastings Pier ranks pretty high.It’s not that the pier is now in the hands of the administrators after a failed financial program – it’s because the pier didn’t really have a financial program that put it into the hands of the administrators in the first place.It’s not because the pier won the world-acclaimed Stirling Prize as the greatest piece of architectural quality in 2017 – it’s because the pier actually delivered just a ‘plank’ that extended into the English Channel with nothing but a few benches and some swings for entertainment. And it’s not because the pier – a once thriving business economy in its own right – had no commercial income from amusements coming in – it’s because it almost celebrated the fact that it didn’t.

If you want a model of how not to operate a modern, commercial pier in the vulnerable economy of Britain’s seaside towns of today, Hastings would probably be among the defining texts. And so this week we see a landmark date in the tale of Hastings Pier – the revival. Come Tuesday – and bear in mind this article goes to print before the end of that vital day – the Friends of Hastings Pier must raise £1 million to prove its viability to GVA – the company appointed by the administrators to handle the sale of the world acclaimed structure.

The FOHP want to keep the facility in public ownership – a highly laudible objective, and one the pier’s community shareholders will support to the very end. To reinforce their credentials,the Friends have unveiled details of their new business plan which underpins the bid to take-over the running of the pier.

According to the Hastings & St Leonards Observer,‘the business plan sees the group set out its hopes to keep the pier’s freehold within public ownership by partnering with a commercial operator,which would run the ‘top’ of the pier and lease space from a body set up to maintain the pier’s structure.’

And the FOHP are desperate to stay in the race.A spokesman for the group said: “Without financial backing in place, we will be out of the bidding byTuesday. We know the funds and funders we can ask but that takes time of which we no longer have.So dig deep guys. If we can come up with £1 mil- lion that means we can have breathing space and time to apply to other funders and raise money generally.Our business plan is solid, we know we can make the pier profitable, we just need the chance to prove it.”

But their track record may not inspire sufficient cross-party confidence. They were, after all, keen backers of the community team in charge of the pier when it fell into dire straits and then into the hands of the administrator. The argument goes: there were no plans then, what has changed?

Well, in fairness, their enthusiasm and dedication clearly hasn’t.But,some will suggest neither has their commercial prowess. The group estimate that £3m is required to turn the pier into a thriving commercial venture – half, they plan to raise through new community share- holders, loans and sponsorship. The remainder through funding groups such as the Heritage Lottery Fund.

But that’s not all. The big hit will be to the pier’s unsecured creditors who are owed nearly half a million. FOHP want them to cut that down to around £300,000.

Jim Breeds, spokesman for FOHP, told the Argus this week: “We have put in a bid as we want to return the pier back to community ownership. We want to own the freehold structure of the pier so it doesn’t get neglected.

“We want to have a say on how the pier is run,we are concerned that private companies might build too many arcade machines and it becomes too commercial. If we’re successful, we will find commercial operators who are able to run events and perhaps a large entertainment complex.

“Basically we want to maintain the character of the pier. However, we recognise there needs to be more attractions on it.” To all intent purposes, both Abid Gulzar from Eastbourne Pier and Luke Johnson from Brighton Pier Group are believed to still be in the running for the venue. Their individual commercial credentials speak for them- selves; they are formidable competitors in the Hastings Pier ownership arena. Their track record is one of vast investment and commercial sustainability.

The community shareholders do not carry as much on their credits list – one RIBA Stirling Prize on the mantelpiece and one pier venture in administration – the latter,likely to end up being the fatal strike straight through the eye by an arrow that will seal their defeat in this very 21st century battle of Hastings.

For the Friends, though, their community’s success of salvaging the pier from the ashes and turning it into an international award winning structure is one mean achievement. The million pound question is,can they raise a million onTuesday and prove their commercial credibility?