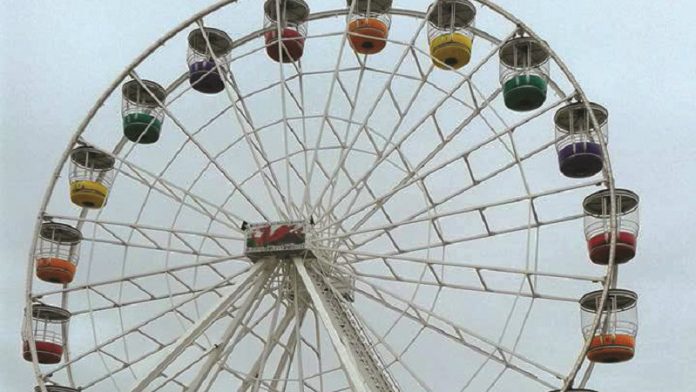 Henry Danter and the Vale of Glamorgan Council have had their moments – and they’re not always good. The latest dispute saw an iconic ferris wheel recently dismantled by the family because of council objections.

The restoration of the attraction is back on the cards thanks to some careful diplomacy, which is very handy considering Danter’s Pleasure Park is of major importance to the economy and social fabric of Barry Island.

Barry Island’s Pleasure Park will soon see the return of its iconic ferris wheel after a council dispute earlier in the year saw its premature closing.

Park owner, Henry Danter, has announced that the iconic structure will be restored to its former place of prominence as soon as proper planning permission is granted by the Vale of Glamorgan council body.

“As soon as we’re told we got planning permission will be the day we start building that ferris wheel back up,” said Danter.

“The ferris wheel was the most expensive thing we ever brought.”

The attraction only officially opened to the public in October, but following a plan- ning dispute was being dismantled as early November.

It is claimed that the council had ordered for the wheel’s closure, but Jonathan Bird, the body’s cabinet member for regeneration and planning has once more refuted as such.

“It is important to stress that despite writing to Mr Danter to advise him of the need for planning permission for the new wheel [which he accepts] along with other outstanding planning issues which remain unresolved, at no point was Mr Danter asked to take down the ferris wheel, neither was any other enforcement action taken against him in relation to the structure.”

Danter is however positive that the timely return of the attraction can only be a boost for both the park and the wider region.

“It is such an icon, such a big thing for Barry. The whole of Wales benefits from that big wheel,” he said.