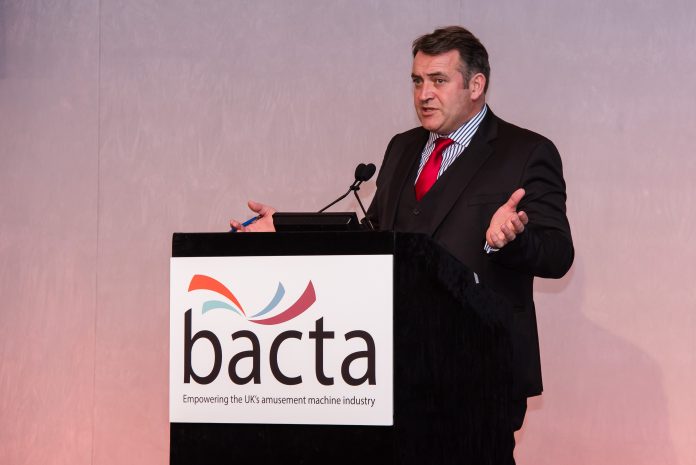 His message to the Bacta Convention was clear: persuade the authorities and prepare the industry for electronic payments. A tough ask, but Frost and his colleagues are up for the fight.

“I have a 16-year-olds on and the other day he and his friends congregated in my house.

“They were all off into town Christmas shopping. So, I asked them how much cash they had on them and out of six boys, they collectively had £3 in cash.

‘Why would we carry cash? We have cards.’

“So they either used their cards or I am in for a crappy Christmas present – but you get my drift.”

The drift Jason Frost was getting over to the Bacta Convention last week was the shift of economic power in your pocket from cash to cards. And it’s a transition that will transform the gaming and amusements industry; for better or worse.

Frost explained: “Europe is still largely a cash society but that picture is variable. The further west you go, the more cash payments are no longer the norm. Critically this is a moving picture and only in a direction where cash is diminishing.

“We can’t afford to ignore this, particularly as change takes time. My feeling is that it’s for Euromat to step in and take the lead on this because it will take some alignment between regulators and the industry to see the necessary investment and to make it a reality.”

And the stats back the case. The digital economy was worth £97bn to the UK last year – a rise of 30 percent in five years. This year it will have topped £118bn.

“The digital economy is growing twice as fast as the rest of the economy and attracts more investment than any other sector,” Frost confirmed.

But the UK remains unsupportive of card payments on machines, a stance Frost wants to change – and quickly.

“Making a change for our industry will take time and to be perfectly clear what I am talking about is pre commitment to play by touching your card directly on a machine and collecting your winnings in the same way,” he explained.

But the benefits for more effective social responsibility action was also viable.

“The social responsibility benefits, where customers could if they wish choose to limit or exclude their payment method could far outweigh any other social responsible measures we have in place today.”

But the mood is changing – in Europe at least as Frost confirmed: “We met with Harrie Temmink from the European Commission and Marja Appelman (the Dutch Gambling Regulator and Chair of the Gambling Regulators European Forum). Both meetings were to discuss electronic payments methods as well as cash in low stakes gaming machines.

“I was heartened by the engaged response that I received from both. There seems to be very little resistance to the principle, and interest in the detail of how it would work. We received an invitation to address a future meeting of the GREF on this and other subjects.”

GREF is a particular source of optimism for Frost. He stated: “GREF seems to be where best practice is shared amongst European regulators, nothing will change here with Brexit as it is geographical.

“Peter Dean who at the time was chair of the old gaming board set it up some years ago. It was at the GREF that the idea of self-exclusion was first banded about and agreed to be adopted by European member states. For us to engage with the GREF will be a first as far as European gaming and amusements is concerned.”

And this is part of the Frost philosophy: tying all the loose ends together and packaging the industry as a viable modern business. Modern enough for smart technology and mobile payments.