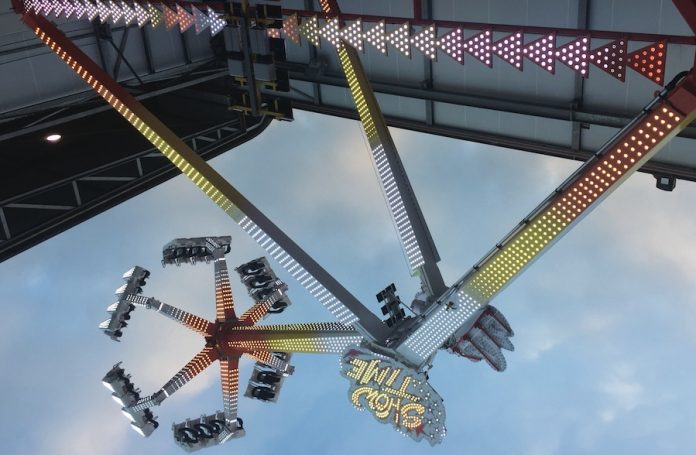 Despite all attractions having been “thoroughly inspected” in the past year, six pendulum-like rides have been closed as a safety precaution after tragedy struck a KMG Afterburner at the Ohio State Fair.

Six high-speed swinging theme park rides have been shut across the UK after a fatal accident on a similar attraction in the US. An 18-year-old man died and three others were critically injured after a KMG Afterburner, a swinging and spinning ride, broke apart at the Ohio State Fair on 26 July.

Government regulatory body, the Health and Safety Executive, ordered the reinspection and temporary closure of five similar rides in the UK.

“As a result [of the incident], on Friday 28 July an enforcement notice was served on five of the machines, which are now to be taken out of use until the notices have been complied with,” a spokesperson for the HSE said.

Pleasurewood Hills in Suffolk, Coney Beach in South Wales and Brean Theme Park in Somerset have closed a similar attraction each after the order was issued.

Ryan Crow Amusements, a rides provider in the North East of England, and Manning’s Amusements in Hertfordshire have also followed suit.

Lightwater Valley in North Yorkshire took the voluntary step of closing its own KMG Afterburner (themed as the Eagle’s Claw), until the HSE has deemed it safe – making it the sixth attraction to close.

Lightwater Valley said told visitors: “Due to circumstances beyond our control this ride is currently closed, apologies for any inconvenience this may cause.”

The HSE spokeswoman explained all five rides in the UK had been “thoroughly inspected within the last 12 months”, but there was no “verified information” on the cause of the fatal accident in the US.

Thorpe Park in Surrey also closed one of its pendulum rides, Vortex, as a precaution after the accident in Ohio, but it has since reopened after approval from the HSE.

A spokeswoman for Thorpe Park said: “We reopened the ride on Saturday with the endorsement of both manufacturer and the HSE.”