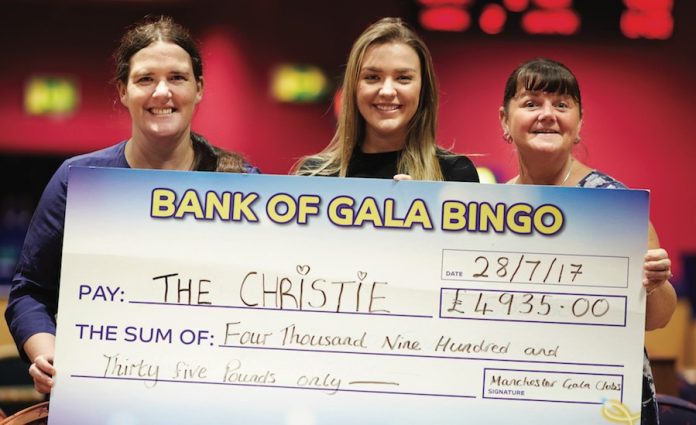 Six Gala Bingo clubs in Manchester held a sponsored walk on Saturday 24 June to help raise money for The Christie treatment centre, after one of its buildings suffered extensive fire damage. The participants walked a total of 30 miles from Wythenshawe to Belle Vue, raising a total of £4,900 for the specialist cancer centre.

“The Gala Belle Vue family is proud to have raised money for The Christie appeal in memory of Lynn Yvette who passed away on the 7th May, 2017. All the customers and team here have been out into the community collecting prizes to help raise money for our charity day and sponsored exercise bike ride in the club,” commented Joanne Parfitt, general manager at Gala Bingo Belle Vue.

“Lynn Yvette was a very special member of our Gala Belle Vue Team and is sadly missed each and every day and this is the least we can do to help support one of her favourite charities.”

One of the largest cancer treatment centres in Europe, The Christie, has been an integral part of many Mancunians’ lives for over a century. In April earlier this year the Paterson building – a dedicated research facility used by staff from The University of Manchester, The Christie and Cancer Research UK, fell victim to a devastating fire which caused major damage to the building. The damages to the site affected many people, including Gala Bingo Belle Vue’s Lynn Yvette. Before unfortunately passing away last month, she was treated at the hospital.

“After hearing about the fire at the Paterson building, I decided that, as a company, we should do something to help,” commented Joanne Torevell, club operations manager at Gala Stockport, who organised of the event.

“Having six clubs in Manchester, a lot of our customers and families have had dealings with The Christie. On hearing the sad news of Lynn Yvette’s passing knowing that The Christie was one of her favourite charities, I thought that it would be a great opportunity to host a walk and charity night in her name.”

The Gala Bingo clubs involved were Wythenshawe, Stockport, Ashton, Harpurhey, Salford and Belle Vue. Staff members from each club took part in the walk. Additional activities, such as a cycling challenge which saw staff members biking 50 miles on static bikes, were held throughout the day.

“I was overwhelmed when I heard what Gala Bingo was doing in memory of my mum. I have met and got to know many of the team and I can see why my mum loved her job and the people she worked with,” said Lynn Yvette’s daughter, Angelina. “My mum would have loved being part of the event and I don’t doubt that in some way she was.”

Jen Bailey, Corporate Fundraising Coordinator at The Christie charity, commented: “We are absolutely delighted to have the support of Gala Bingo Manchester clubs, it is brilliant to see so many members of their team taking part in the Walk on 24th June 2017 in support of The Christie.”

Gala Bingo clubs across the Northwest region have also been raising money for the We Love Manchester Emergency Fund. Thanks to the generosity of both the staff and customers, Gala Bingo raised almost £10,000 for the fund to support those who were injured or bereaved by the tragedy.