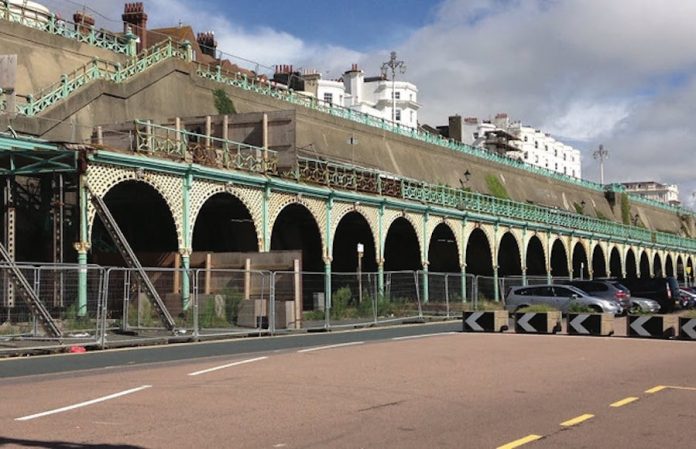 Hundreds of Brighton residents and businesses have pledged over £11,000 to restore the unique seafront monument the Madeira Terraces, as part of a crowdfunding campaign the city’s council launched last week.

More than 400 backers have contributed to the scheme to save the set of iron arches that run alongside half a mile of the seaside, in addition to a £100,000 pledge from the city council – drawn from local site i360’s revenue.

“This campaign is about galvanising support to preserve something old while at the same time providing new business opportunities and an enhanced seafront space for residents and visitors to enjoy for generations to come,” commented Brighton and Hove City Council leader Warren Morgan.

The crucial first step in a £24m fourpoint plan to save the arches and reinvigorate business on the seafront, part of the campaign’s long-term goal is to create up to 50 glass-fronted pods for shops, cafes, offices and hotels.

The current round of funding will be used to restore at least three arches of the 151 within the grade II site, which is the longest continuous cast iron structure in Britain.

Although the seafront is an integral part of Brighton, the entire length of the Madeira Terraces was closed in 2015, with most businesses forced to leave because of the risk of collapse.

Brighton’s council failed in a bid earlier this year to gain funding for the project from the Coastal Communities Fund.

Councillor Morgan previously criticised the government for “failing to invest even a modest amount in our seafront heritage and tourism.”

“In the autumn the council will go to the Heritage Lottery Fund to ask for a funding bid of £4 mn and will need to demonstrate there is strong public support,” said Morgan.

Crowdfunding campaign organiser Spacehive, who will take around £30,000 in fees, has been impressed with the level of support so far – as the campaign hit a record number of pledges in the firm’s history within its first 48 hours.