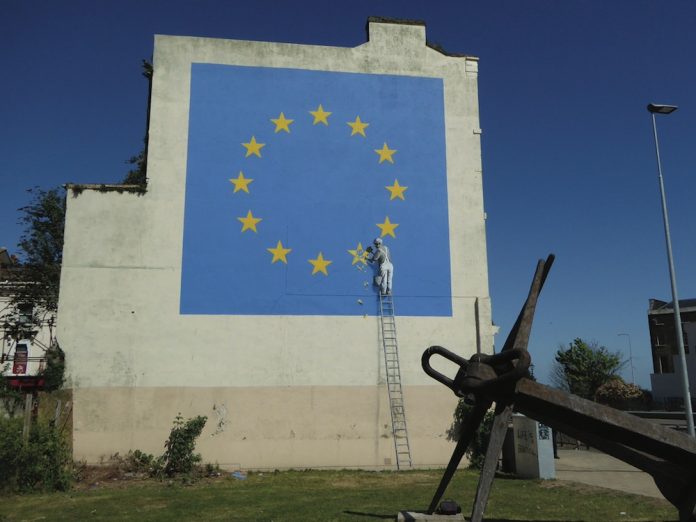 Following the appearance of a second Banksy on Godden property – this time in Dover, local authorities have suggested that the building be listed or bought through a compulsory purchase order. The Goddens, however, have other ideas.

Banksy’s Brexit inspired mural on the former site of Castle Amusements, Dover, has been the talk of the town over the last couple of months as a councillor petitioned for a compulsory purchase order and an MP campaigned for the building to be listed – but the Godden family, who own the building, want to sell.

On 16 June, MP for Dover and Deal Charlie Elphicke launched a campaign to “Save our Banksy” to get the building listed, calling on Dover District Council to use all its powers to halt any demolition of the building or removal of the work.

Answering the cry, Councillor Nathaniel Richards issued a petition on 25 July suggesting a compulsory purchase of the building, however Elphicke quickly shot down this proposal due its cost to the public.

“If DDC were to issue a compulsory purchase order it would be very expensive and the burden would fall on the taxpayer,” Elphicke said. “The best way forward on this is to get the building listed to protect it for the people of Dover and generations to come. Historic England are currently considering the case and I’ve also raised the issue with the arts minister John Glen who will make the final decision.”

Heightened interest in the Godden’s plans for the Banksy began in May after they stated it may be sold to a London art gallery.

This is not the first time the Godden’s have been graced by the artist, as in 2014 the mural ‘Art Buff’ was painted on a Godden-owned property in Folkestone.

Mayfair art dealer Robin Barton, who specialises in Banksy pieces, acted for the Goddens last time and has been hired to sell the new mural, stating that the moment they discovered another Banksy on their wall “they laughed. A lot”.

“I’m sure under the surface there is something going on. Truth is stranger than fiction,” he told the Daily Telegraph. “Does Banksy want the walls to be sold? No. Does Banksy like the publicity? Yes. And he’s not stupid. He chooses the site of these works very carefully.”

The Godden family, who operate a chain of AGCs and FECs in the South East, said in a statement that they are “exploring options for the retention, removal or sale of the piece”, adding they “will look to benefit local charities with proceeds from any sale”.