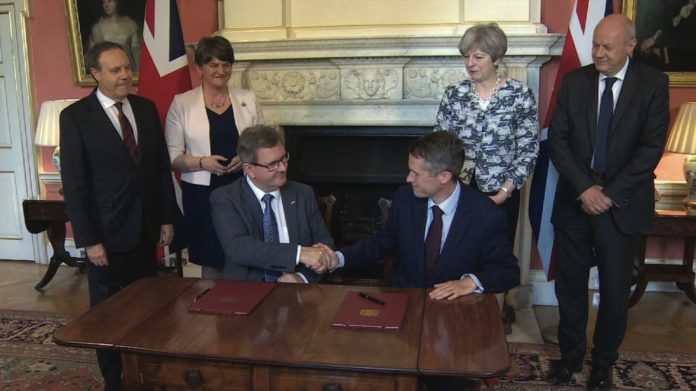 With its southern neighbour enjoying a tourism VAT rate of nine percent, the DUP has negotiated a consultation report to look at reducing Northern Ireland’s rate to bring parity between the borders.

The £1bn deal between the Democratic Unionist Party (DUP) and Theresa May’s minority government has secured a consultation report into the impact of tourism VAT in Northern Ireland.

The review will be commissioned with the intention of recommending “how best to build upon growing success” of the country’s tourism sector and will also include an investigation into Air Passenger Duty. This follows a select committee in March in which The Northern Ireland Affairs Committee made the recommendation of reducing tourism VAT after it heard from representatives of the sector in Northern Ireland about their concerns for the future of the land border with the Republic of Ireland following Brexit.

“The government has recognised the need to examine how Northern Ireland’s businesses are impacted by the UK’s high rates of tourism VAT,” said Ufi Ibrahim, chief executive of the British Hospitality Association (BHA). “Reducing tourism VAT across the UK is a key pillar of the BHA’s recommendations to government to support the UK’s fourth largest industry and we look forward to working with the Treasury and leading the industry’s representations to this detailed report.”

Ibrahim highlighted that the UK’s tourism VAT rate at 20 percent is double the European average. As a result, Northern Ireland’s hospitality and tourism businesses risk losing customers to the Republic of Ireland where tourism VAT is nine percent.

“We have been calling for a reduction in UK rate of Tourism VAT to five percent to create 121,000 jobs, increase UK export earnings from tourism and bring in £4.6bn to the Treasury over 10 years,” Ibrahim added.

Relating the confidence and supply agreement to the pub sector, Brigid Simmonds, BBPA chief executive, said she welcomed the certainty and hoped to see the potential of a tourism VAT reduction spread across the whole of the UK.

“What UK business needs is more certainty, and this deal should mean that the government has a working majority in Parliament as the Brexit negotiations proceed,” said Simmonds. “On the specifics of what has been agreed, it is positive for pubs that the government has agreed to review the impact of VAT on tourism in Northern Ireland (as well as Air Passenger Duty), but it is important to stress that whilst this has a big impact in Northern Ireland, high rates of VAT on hospitality is very much a UK-wide issue, so we will be looking closely at what emerges.”

In response to the announcement, Dermot King, Chairman of the Campaign to Cut Tourism VAT, said: “The commitment to consult on the impact of Tourism VAT in the DUP-Conservative deal shows the importance of the growing and successful hospitality and tourism sector to the economies of Northern Ireland and the entire United Kingdom.

“I am confident the findings of this consultation will show that Tourism VAT should be reduced to 5 percent across every part of the UK, creating 121,000 jobs, increasing UK export earnings from tourism and bringing in £4.6bn to the Treasury over 10 years. The benefits would be felt most keenly in coastal and rural areas in need of regeneration. We look forward to submitting our extensive research to the government outlining the positive impacts of a reduction.”