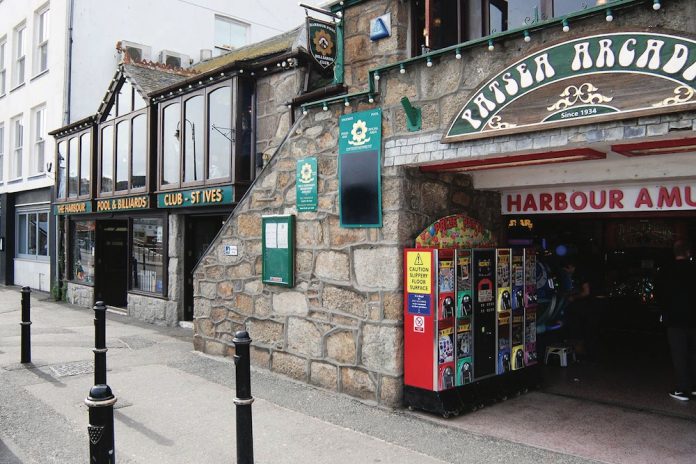 In journalist Malcolm Gladwell’s book, ‘The Tipping Point: How Little Things Can Make a Big Difference’, he defines a tipping point as “the moment of critical mass, the threshold, the boiling point”.

Down by the idyllic Cornish coastline, Sean Patrick, owner of Harbour Amusements, is moving closer towards this precipice in his cash-handling strategy; implementing an alternative payment system. Indeed, as time passes, more and more factors are influencing Patrick towards installing one of these systems, most recently an increase in his bank charges for cash transfers.

“We have been looking at it, because apart from anything else, my bank charges have gone through the roof with cash handling, so any way we can reduce cash-to-bank is a bonus I think,” he said, adding that he saw no real justification for the increase. When considering his options, however, Patrick must make sure that the system will suit the needs of his St. Ives FEC, which has a mixture of traditional, video, and sports games, as well as an 18+ area.

“Ticket-in Ticket-out would be really awkward for us, possibly in the 18+ area would be easier,” he explained. “For the higher value gamblers it probably is viable, but out on the floor it’s not practical for us to think about that at the moment.”

With TITO not suiting his particular venue, Patrick is looking at ‘play card’ payment systems, however he believes that in the long term regulation will have to change in-line with an increasingly cashless society.

“Everyone’s going cashless these days, so I wouldn’t be surprised that if in 20 years there isn’t cash,” he continued. “People will just tap their phone on the machine or something like that. It should be a level playing field, if the internet can do it then I don’t see a problem with us doing it. If anything, if someone’s stood in front of you then they are much better monitored than if they are online.”

For now, however, cash remains king at Harbour Amusements, although it has been a costly reign over the last six months as the differences between the sample and the current new £1 coins caused “a bit of a nightmare”.

“We managed to get some samples from the Mint and converted just about everything before the new coin came in, and when it did there was some disparity between our samples and what is in general circulation, so we had to do it all pretty much all over again,” Patrick explained. “We had to pay to get things adjusted and I also had to pay my staff the time to take things in, take things out, post things off, so it did cost us extra.” Looking forward to October, he added that converting mechs to not take the old coins would be an easier process, especially as he believes many of them will be out of circulation already.

“The banks are bagging up all the old pound coins as we speak, and when the time comes, there’s not going to be very many in circulation,” he concluded. “I’m hoping it will go reasonably smoothly, there’s generally a little bit of leeway for us. I think it will be a lot less painful than when they came in.”