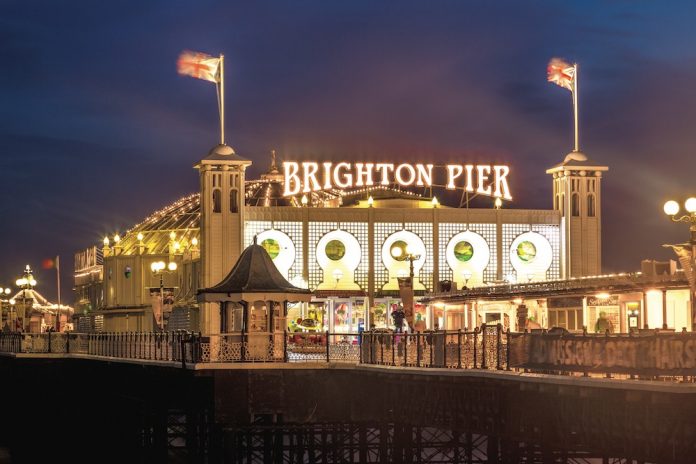 Any spell of hot weather and you can guarantee newspaper spreads showing packed beaches at any number of Britain’s piers and seaside resorts. However, there’s no need to read the captions to know where the pictures were taken, thanks to the iconic attractions captured within them. Whether it’s Brighton’s Palace Pier, the Grand Pier in Weston-super-Mare, Blackpool Tower or indeed, Llandudno Pier, these structures represent the embodiment of their respective resorts, and with it, the promise of family fun and Great Britain’s famous seaside holiday that continues to draw millions of visitors and their disposable income year in, year out.

The vast majority of Britain’s 58 piers are privately owned, run by a small corp of custodian entrepreneurs who rely on the revenue they generate to keep these jewels in the seaside crown standing, in the process attracting legions of visitors and generating economic benefits for local and regional economies. The economic impact of having a well run and vibrant pier attraction has been put into sharp focus by a study conducted by Tir Prince Leisure Group, owners of Llandudno Pier, which calculated the income it generates for the local economy to be a staggering £100m a year. Britain’s

The biggest revenue stream for Britain’s piers – and the only one that can be relied upon all year round – is coin-operated amusements. Take them out of the equation and, as Mumbles Pier managing director and Ameco chairman.

John Bollom puts it bluntly, the maintenance of Britain’s piers would come to end. “I don’t know if my business as it is could carry on, because amusements are such an important element of our revenue mix. Yes, we do have income from our food, beverage and other retail businesses on the foreshore, but to lose that part of our offer would be an absolute disaster. Effectively, the pier would close and cease to be viable under private ownership.”

Whilst the pier would not be left to fall into the sea, in human terms, Bollom estimates that the 85-strong workforce would be halved and described the likely impact of losing the only attraction that brings visitors to the Mumbles peninsula beyond the summer season as “dramatic”.

His view was echoed by Anne Martin who, as well as being the managing director of Brighton Palace Pier, (whose 4.6m visitors a year eclipses those of the V&A 3.9m, Science Museum 3.3m, Tower of London 2.8m and Stonehenge 1.3m) recently became chair of the Brighton and Hove Tourism Alliance.

She identified Britain’s amusements sector as being a huge part of the seaside business model, whether for an iconic national attraction or one with a more regional appeal. Without it, Martin said the tourism industry at coastal towns and cities would be left with a huge void to fill.

“The key to the success of Brighton is that it has such a varied offer, so once you start fiddling around with that and taking things away, of course it has an effect. If there were no amusement revenue streams in the whole city, while it might not prevent people coming, it would definitely reduce the city’s offer, and once you reduce the offer you reduce the dwell time and the length of a visit.”

In her view, amusement attractions are the difference between a day-trip and the three-day weekend stays that a campaign by the Brighton and Hove Tourism Alliance is currently promoting. At a time when many seaside resorts are trying to encourage staycations – providing a much-needed boost to coastal economies – it’s little wonder that she sees the maintenance of Brighton Palace Pier as a moral obligation.

“For the past 120 or so years, this pier has been the only totally privately- funded conservation project in the UK. You can’t imagine Brighton without a pier, so there’s a huge responsibility there. It would be like Blackpool without Blackpool Tower.”

In Weston-super-Mare, Grand Pier coowner Michelle Michael MBE, laid out the expense of keeping the now fully-revitalised attraction standing. Business rates alone are £150,000 a year, while the cost of insuring the pier runs into the hundreds of thousands of pounds. And then there’s the maintenance costs. Without coin-op amusements, the economics simply wouldn’t be viable.

“The structure would degenerate, because on any pier you always have a rolling maintenance programme and that has to be funded,” she explains. “The majority happens on the deck and underneath, so most people don’t grasp the costs involved. I always liken it to having to maintain the foundations of your house every year. If you had an annual bill for that, nobody would see where that cost goes, yet effectively that’s what happens to us.”

To mitigate, Michael believes the Grand Pier would no longer be able to open all year round and its 40 full-time staff – which flexes up to around 180 during the peak season – would be cut to under 10. In such an event, the impact for the wider regional economy would likely be devastating.

Michael painted a stark picture: “We see about 80 per cent of Weston’s footfall on the pier. Even if it was 50 per cent, imagine 50 per cent of the footfall not having anywhere to go for 60 per cent of the year because the pier is closed. All of a sudden, you take Weston off the map and they’d divert themselves and go somewhere else, like Bristol, Cornwall or Exeter, where there was a higher concentration of things to do.”

As the main tourist attraction in Weston-super-Mare, the businesses that benefit from the visitors the Grand Pier draws – the bars and cafés, newsagents and convenience stores, petrol stations and restaurants – would doubtless take a hit.

“When we reopened after the fire in the half-term of October 2010, businesses in Weston experienced a 30 per cent increase in trade, which gives an indicator of the affect we have on the local economy.”

For Adam Williams, director of Llandudno Pier owner Tir Prince Leisure Group, amusements provide around 65 per cent of the attractions income. Take that away, and the implications are fatal.

“The income stream is so important for the likes of Llandudno Pier, it would fail to exist without it,” he warns. “You would no longer be able to maintain or insure it. Minimum maintenance underneath the decking that we budget for is £200,000 a year, not taking into account damage from something like a storm. Insurance is staggering – who in their right mind would want to insure a pier?”

In terms of the wider regional impact, Williams has just completed an economic survey of the pier’s value. It indicated that local employment would be significantly affected, with the pier alone directly and indirectly employing around 150 people.

“The pier makes the difference between resort status and simply being somewhere to go for a coastal walk, which is what visitors would end up doing,” Williams states. “There would be no need for the hotels, the background infrastructure, the shops and restaurants in the town and all the staff that these businesses employ. It’s like pulling the bottom cards out of a tower of cards – the whole lot would collapse.”

He doesn’t need to look far for a warning of what life without an amusement attraction means for a seaside resort. Just six miles down the road is Colwyn Bay’s Victoria Pier, which lost its amusement arcade to closure in 1991. In the subsequent years, various owners and community groups tried and failed to revive the pier, while it fell into an increasing state of disrepair.

At the start of February 2017, the structure’s inevitable collapse began, hastened three weeks later by the arrival of Storm Doris, and plans to pull it down have now been submitted.

Despite millions being spent by the regional council on multi-phase regeneration project, Williams says that visitors are neither spending nor staying.

“A lot of people drive there – my family included – they park on the promenade, play on the beach, then get back in the car and drive home. It’s now mostly only people from the local area, therefore you’re not getting the spend per head in the town or in its B&Bs and hotels.”