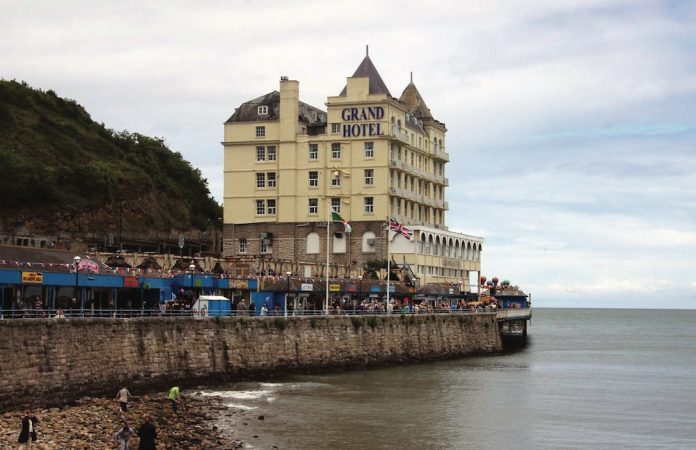 If given the green light, residents of a new apartment block could seek a reduction in the opening hours of one of Llandudno Pier’s vital FECs.

Llandudno Pier owner Adam Williams has warned that the proposed Pier Pavilion development could harm trade at one of its two amusement arcades.

In a letter calling on planning officials at Conwy County Borough Council to oppose the scheme, the pier said that if given the go-ahead it could put the seaside attraction’s future at risk.

Plans for a new building comprising residential and commercial space for the site next to the pier and the adjacent Grand Hotel, which has been derelict since the original pavilion burnt down over 20 years ago, were submitted by developer Alan Waldron in March.

Waldron has claimed the building, which would feature 54-apartments, two restaurants, kiosks and underground car parking, would create around 100 jobs. In the letter, Llandudno Pier said that it could lead to reduced opening hours at the Leisure Island family entertainment centre at its landward end, which opens until 10:30pm during the summer season, resulting in a loss of revenue.

It explained: “The apartments which form part of the proposed development have extensive balconies, some of which would overlook the amusement arcade at the landward end of the pier.

“Having spent considerable sums of money in purchasing the apartments, future residents are likely to do all they can to enhance the ambience of their accommodation.

“This may lead to complaints with regards to possible noise disturbance from the amusement arcade, in particular, which could, in turn, result in licence restrictions relating to opening hours.

“Such a restriction would reduce the income generated by the arcade.”

The letter also pointed to the damage caused to its income due to loss of the pier’s kiosks, which Waldron’s plan would see removed and replaced with his own, as well as the disruption that would deter visitors to the pier during the new building’s construction.

“Thus, the proposed development has the potential, in combination, to reduce significantly the income generated by the pier, in both the short and long terms,” it added. “The loss of revenue would, in turn, impact upon the maintenance of the Grade II listed pier, as funding levels are reduced, and could even place the future of the pier at risk.

“A reduction in the quality of the pier environment, through reduced expenditure on maintenance, or uncertainty over the future viability of the pier would be likely to have a major adverse impact on tourism in Llandudno.”

The application is expected to come before the planning committee of Conwy County Borough Council during the summer, but it is thought it will not be ready for the committee’s next meeting in June.