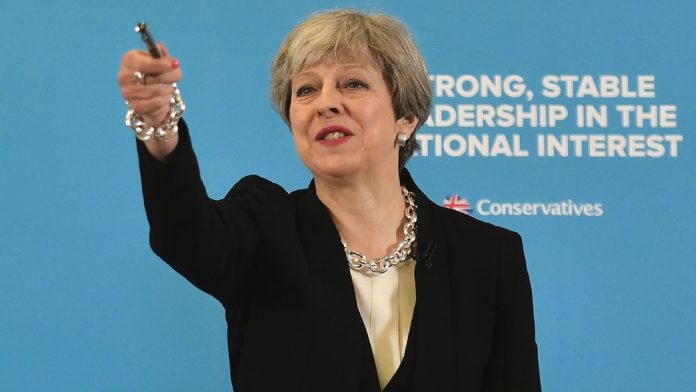 No FOBT commitments from the Conservative manifesto, but a strong backing for small businesses, coastal communities and affordable energy. The only steady hand to steer a post-Brexit Britain? The Tories think so.

With a half-baked triennial review now on the backburner, the Conservative manifesto held no surprise FOBT commitments – in fact, no real surprises whatsoever – as Theresa May committed to supporting small businesses, coastal communities, affordable energy, and gaining the best deal from Europe.

While many analysts were underwhelmed by the manifesto, more surprises and more uncertainty was, one would imagine from those in the blue corner, the last thing needed for a UK about to set sail towards a more sovereign future.

Indeed, the Tory manifesto seems much calmer in tone than its Labour equivalent, especially in its approach to small businesses, which it will “continue to support through business rate relief and low taxation, and by reducing the bureaucracy and regulation that prevents small businesses from flourishing”.

In practical terms, this means sticking to the plan of lowering corporation tax to 17 percent by 2020, which the manifesto says will “help to bring huge investment and many thousands of jobs to the UK”. The Conservatives also state that they “know the business rates system presents considerable challenges to some smaller companies”, promising to “make longer-term reforms to the system to address concerns about the way it currently works” and to “make sure that revaluations are conducted more frequently to avoid large changes to the bills that businesses face”.

This may be a reaction to the discontent caused by April’s business rates revaluation, which saw some operators rates – such as Charlie Manning’s, owner of Manning’s Amusement Park – rise by a third. Based in Felixstowe, Manning was also concerned about the seaside sector, which the Conservatives may help strengthen with their promise to “extend our successful Coastal Communities Fund to 2022”. This is supported by a more general pledge to “ensure industry and businesses have access to reliable, cheap and clean power”, and “the infrastructure – the road, rail, airports and broadband – that they need”.

Another important factor for the amusements industry is energy, and on this the Tories show some ambition, with the aim “that the UK should have the lowest energy costs in Europe, both for households and businesses”. This goes up against a nationalisation option from the Labour Party.

The Tories plan to “commission an independent review into the Cost of Energy”, as well as “establish an industrial energy efficiency scheme to help large companies install measures to cut their energy use and their bills”. With energy being such a large component in an amusement arcade’s cost matrix, and some operators owning multiple venues, this commitment by the Conservatives will be seen as significant.