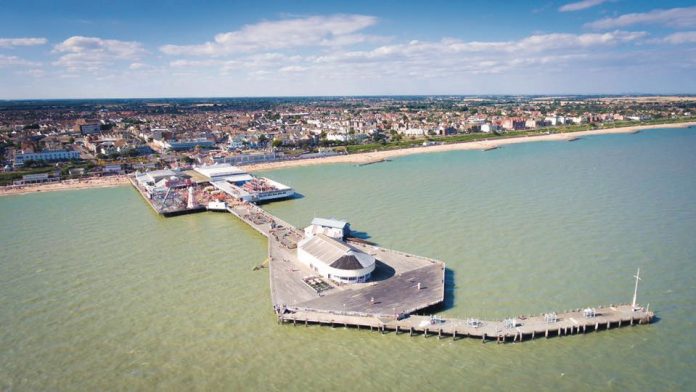 The Ball family has made another major investment in Clacton Pier as the project to make it one of Essex’s most popular seaside attractions goes from strength to strength.

Billy and Elliot Ball’s investment in Clacton Pier has continued apace with the reopening of the attraction’s first building as an allnew entertainment venue.

The brothers’ Clacton Pier Company has revived the Jolly Roger, built on the attraction’s seaward end in 1881, by making it home to a travelling circus. When it hosts its first family show on the weekend of 27 May, it will be the first time that the pavilion has been fully open to the public for around three decades. The human performer-only circus will feature acrobats, clowns and a traditional water show and is scheduled to run over the nine days of the late May bank holiday and every day of the school summer holidays.

Billy Ball, director of the Clacton Pier Company, said the regeneration of the building was something it had been exploring ever since he and his brother bought the attraction in 2009.

He commented: “The Jolly Roger holds a very special place in our hearts and in the hearts of many. “We have been continually asked when we are going to do something with it and bring it back to life.

“That day is just a matter of weeks away now and we have reinvested in this historic building. “It is a very usable space with huge potential and I know this initiative will be welcomed by many town residents and those who remember the Jolly Roger as it was in its heyday.”

Ball explained that his staff spent three weeks clearing out a large amount of pier memorabilia from the building over the Christmas period, which was then sold off at auction.

“It was the Jolly Roger’s introduction that made Clacton Pier into a true leisure pier, rather than just a working platform,” he continued. “It was called the Pier Pavilion at first and then the Jollity before becoming the Jolly Roger, and we are considering launching a competition to rename it for the future.”

Circus Fantasia – who are based in March, Cambridgeshire, and operate across East Anglia – has been hired to perform the family shows. The new venue will host three performances a day and provide seating for about 300 people.

Ball said his company is developing several more expansion plans for the pier, which currently employs over 200 staff.

“There are exciting times coming and we are continually looking to reinvest money into the pier,” he added.