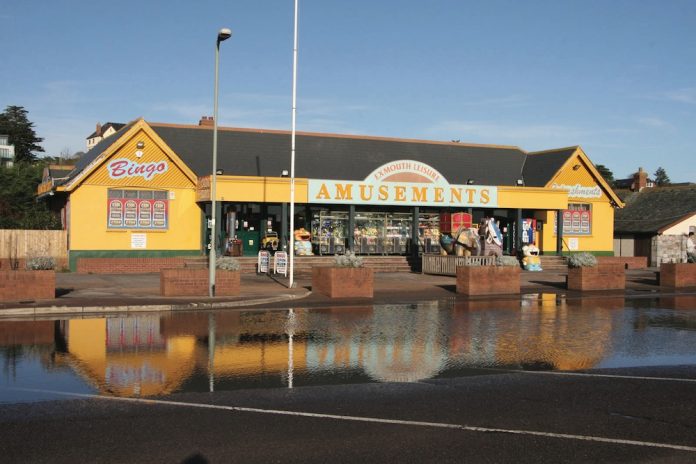 A multi-million pound scheme to transform the Exmouth seafront has been approved, but some are questioning whether the plan including watersports facilities can really create a wave of tourist revenues for the town. Especially if it means a mve for the traditional amusement businesses.

East Devon District Council’s (EDDC) Development Management Committee has given the green light to plans for revitalising the Exmouth seafront, with proposals including a watersports centre, a mixed amusements area, and accommodation.

Phase one of the £18m development will realign the Queen’s Drive road and build a new car park, while the second phase will see the construction of the watersports centre.

Developers Grenadier Estates will now put their plans before the public and the company claims it will consult fully with the community before applying for planning permission.

Harry Parkin, owner of Exmouth Leisure Amusements, which currently stands on the proposed redevelopment site said he was fully behind the plans: “Exmouth needs improving. Everybody wants the water sports complex and the road will need to be moved to accommodate that.”

He added, that despite holding a long-term lease on the amusements site he would be ready to relocate within the area to facilitate the positive development. However, secrecy around the plans were a particular sticking point: “I don’t think the council has been very forthcoming, I’ve asked them what the latest position is and they’ve told me they still have nothing to tell me.

“The schemes show I am being moved, but I haven’t officially been told that. If it improves Exmouth and that involves me moving then I’m for it, but I don’t like being constantly kept in the dark.”

Also in the redevelopment area, the Exmouth Fun Parks FEC faces closure, however owners previously reached a mutual agreement with EDDC to allow the attraction to stay open until the end of August, making the most of the bumper summer season ahead.

The plans have drawn some opposition however, with campaign group Save Our Seafront arguing that the large scale development would be of detriment to the town’s seafront, with several long-standing businesses to be demolished in anticipation of the project.

However Ian MacQueen, chairman of the chamber of commerce, claims that Exmouth seafront is underperforming economically, and the redevelopment is the sensible course of action to boost tourism, and interest in the locality.

“This could be the most important seafront development in the whole of the region,” he stated. “Economic modelling shows that if the spend by day visitors increased to the average in East Devon would bring £23m into the economy and 700 jobs, and the Queens Drive development will do this.”