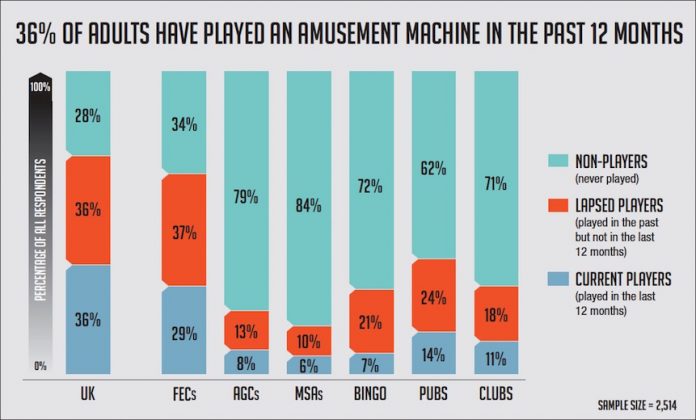 The pursuit of a fun experience and the chance to win money, have been identified as the two most important motivations for UK amusement machine players, in a large scale consumer survey conducted by PricewaterhouseCoopers LLP (PwC) on behalf of bacta.

The PwC Consumer & Industry Insights is the largest body of research conducted on attitudes towards amusements machines and involved online surveys and face to face interviews with a sample of 2,297 current/lapsed players and 2,500 non-users of amusements machines.

The body of research also included site visits, a programme of in-venue player observation as well as qualitative interviews with industry experts.

John White, CEO of bacta, believes the findings lie at the very core of what defines the industry. He explained: “The origins and the ethos of the industry is about delivering value for money entertainment within a socially responsible framework. AWP, ‘Amusement With Prizes’, defines the proposition and clearly strikes a chord with consumers.”

Throughout the research findings, the provision of bigger and better prizes is consistently identified as a motivating factor to encourage play, as is having a greater range of games, including the further introduction of digital machines.

For the segment of lapsed players researched by PwC, particularly those in pubs and FECs, the less appealing nature of the machine playing experience is highlighted as a reason for no longer playing.

Many industry observers believe there is a direct relationship between prize levels and the perceived attractiveness and desirability of the machine playing experience. Higher stake and prize levels free-up games designers to add layers to a game, enhance features and generally make the product more inviting. Currently the industry’s games creators are working with the hand brake on.  For as long as the same restrictions don’t apply to every gaming operator on the high street, the low stake sector will undoubtedly continue to suffer from unfair competition and a consequent migration of players.

Tony Boulton, managing director of games creator, Project, thinks the issue of games being perceived as unappealing by consumers requires a different strategy. He explained: “I think the market needs a new approach which can only be achieved through the creation of a new category of game. The B5 proposal contained in bacta’s triennial review submission would allow us to offer a range of games such as horse racing and multi-hand poker that aren’t currently available. Not only would they be different but we would be able to provide players with longer games within a commercially viable framework.”

In line with other modern retailers on the high street, there are a lot of initiatives that the industry has been and continues to apply to the business, but, according to White, the foundations of any commercial organisation is the ability to remain competitive in their core offering.

He said: “Leisure businesses up and down the country have been investing heavily in their offering in order to enhance the customer experience. Unlike non gaming retailers, operators do not have the same flexibility to alter the offering, which is why it is so important to have a regular review of stakes and prizes. The triennial should provide the opportunity to take stock of the industry set against an empirical analysis of player numbers, demographic shifts and advances in technology. In a fast moving, competitive sector such as leisure, it’s very difficult for operators to have to play catch-up, which is why bodies of research such as that carried out by PwC are so valuable and why the triennial is so fundamental to the health and future of an industry which supports the employment of 34,000 people and pays some £270 million of MGD and machine VAT.”

The FEC sector has 14 million current players (where play is measured by at least one visit in the previous 12 months when an amusement machine was played). This is followed by Pubs, where 7 million have played a machine at least once in the past 12 months, Clubs (5 million), AGCs (4 million), Bingo and MSAs (3 million each).

Players who have played in the last 12 months play across an average of 2.64 verticals.  On average, consumers play a few times a year. A typical length of visit is 30 minutes to 1 hour, although there are differences by vertical.