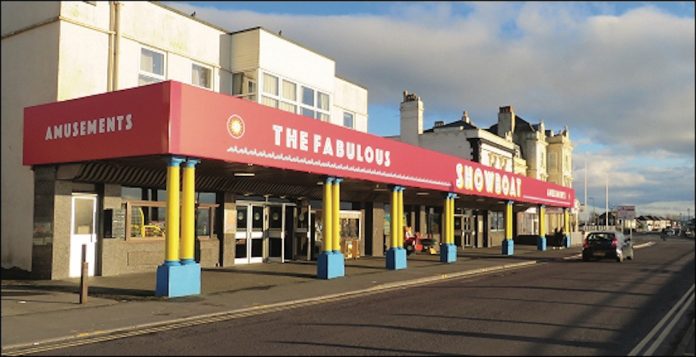 National operator Praesepe has embarked on a wide-reaching rebranding programme at its seaside locations, a policy designed to capture the momentum of the staycation phenomenon. ‘The Fabulous Showboat’ has sailed into Burnham-on-Sea ushering a new era for the Sunspots arcade offering.

Sunspot Amusements in Burnham-On-Sea has been renamed ‘The Fabulous Showboat’ as part of a nationwide rebranding by owner Praesepe.

After a ‘very encouraging’ year of business, Nick Harding, CEO of Praesepe, explained why the company is changing the face of its seaside arcades.

“We wanted to complete our refurbishment of the ‘Sunspots’ arcade with a brand new name designed to catch people’s attention and encourage them to come and see all the changes we have made,” Harding commented.

“We operate in a brand-led market with a discerning customer base. The brand serves as a hallmark of quality, integrity and great value for money entertainment. Unless there is an historic reason for retaining the name, such as ‘The Golden Gate’ at Weston, we are working our way through the estate and rebranding our seaside arcades as The Fabulous Showboat. The new branding also links into our ‘Funshine’ sub brand which we use in our ticket prize redemption machines.”

The rebranding will be complete in time for summer, when Harding expects a strong Euro to boost coastal tourism further.

“The UK tourist industry generally is being positively affected by a strong Euro which is making more people rediscover the fantastic British coast line through the phenomenon of the so called ‘staycation’,” he said. “I think when circumstances, such as currency fluctuations, prompt a shift in behaviour it can become a catalyst for longer term and more fundamental change.” Indeed, Harding believes these fluctuations can reinspire a generation of regular staycationers, as well encouraging an increasing number of visitors from overseas.

“Once families have become reacquainted with what the Great British seaside holiday has to offer, not least in terms of value for money and hassle free accessibility, they return,” he concluded.

“Added to this, we have noticed an upturn in the numbers of international visitors whose leisure spend is now going a long way and allowing them to stay for longer.”