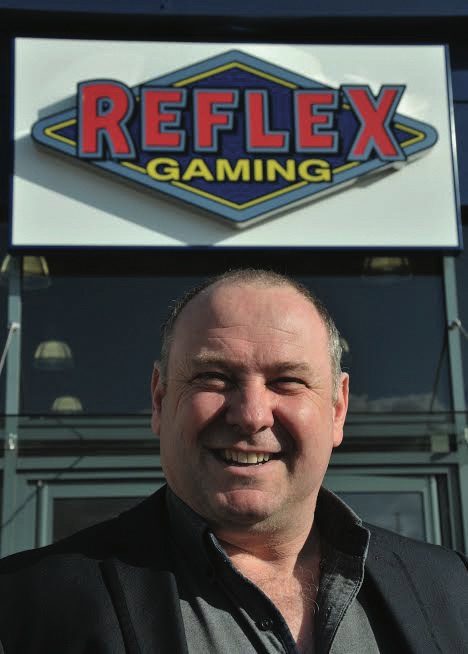 Reflex’s Steve Clarke opens up on the road as he travels along the south-coast installing the company’s popular new multiplayer.

With lots of orders come lots of installations, and Reflex’s Steve Clarke has been on the road this week setting up the company’s newest multiplayer, Lady Luck Moonstruck, in arcades in Lee-on-solent and Torquay.

“It’s loosely based on one of our previous games, Lady Luck Around The Clock, with several added features,” Clarke explained.

“One of these new features is a special Moonstruck bar fitted for added player appeal, and that’s proving very successful.”

Clarke added that some of these features are aesthetic, with Lady Luck Moonstruck having addressable LEDs across the whole top box.

“It really stands out,” Clarke stated. “The sounds and the bonus features are also a little bit quirky, so we’ve developed our own identity with Lady Luck, she’s been going for quite a while and has become instantly recognisable. It’s a unique identity aswell, some other games still use bullion bars, but we have a moon symbol. I can’t think of anyone who has used a moon symbol before!”

The amount of orders Reflex has had speaks for itself, and Clarke has been fulfilling some of these over the last week.

“I’ve been installing a lot of them for operators who have purchased directly from Reflex; just this week we have another two being installed,” he said. “The orders are still coming in and we are still producing them, with many repeat orders coming in aswell. This week I’m installing one in Lee-on-the-Solent and I’ve also got a long drive to Torquay. These are both arcades, but we have got several in bingo halls that have been very successful, and it looks like there will be repeat orders there as well.”

Indeed, Clarke explained that with the amount of Lady Luck Moonstruck machines Reflex has sold, the production line will be running to the end of April already, highlighting the overwhelming popularity of the company’s newest multiplayer.

“Some games just have it, some games don’t, but players always migrate back to their favourites,” concluded a reflective Clarke.