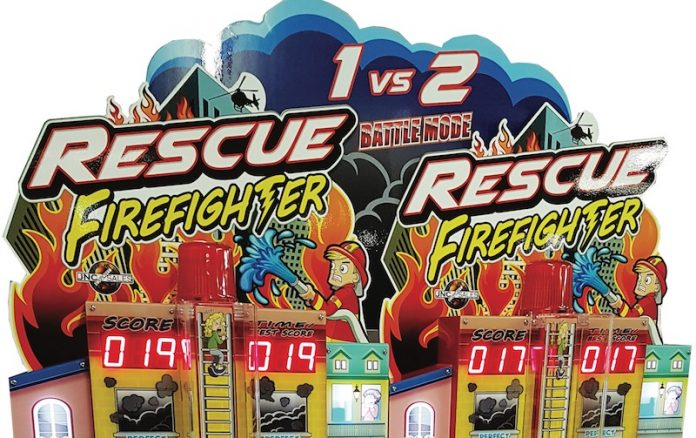 From the latest machines on the market to restored used pieces guaranteed to turn a profit, JNC Sales has all corners of the redemption market covered.

As the redemption market continues to evolve, so does JNC’s comprehensive range of new and used redemption machines. From big top-end pieces such as Emergency Rescue and Ocean Pearl to cheaper yet equally effective classics such as Speed Demon and Pile Up.

A quick glance at JNC’s stocklist highlights their ability to provide machines of all shapes and sizes, for customers with varying budgetary requirements. The 2017 EAG show further demonstrated the value of effective redemption pieces. New pieces such as Emergency Rescue and Rescue Firefighter had great sales figures as predicted, whilst used products like Keymaster and Superstar were also popular across the three days for both domestic and international customers.

It is no coincidence that JNC’s new redemption range is simple in design, yet hugely sought-after. JNC continue to invest in internal product development and on-site testing, and, by listening to industry feedback, are able to fine-tune new machines to ensure ease of use and profitable earnings.

The Emergency Rescue piece is tribute to this, with the three-player roller-ball machine now an acclaimed family favourite based on upgrades to the cabinet, improved design and an improved soundtrack to enhance the player experience. Available to play as a one, two or three player piece, players will enjoy the thrill of getting their emergency vehicle to the rescue site to ensure they get the most tickets.

The Rescue Firefighter whacker also follows this trend. Initially released as a one-player whacker, the game has become even more successful through the introduction of a linkable second piece, allowing players to race each other in a bid to get the fireman to the top of the ladder and win the ticket jackpot. Small in footprint yet highly acclaimed in design, this ticket redemption machine has been a hit across both arcades and indoor play centres across the UK.

The JNC warehouse is always playing host to exceptional used machines and they recently saw the arrival of several much-loved redemption pieces. Snowdown from Jennison is a great-looking one or two-player redemption machine which challenges users to be the quickest to fill their tube with the most snow. With special feature buttons to help fill the tubes faster, this is an exciting game with a strategic twist.

Also in stock is the charming Swings and Roundabouts roll-down, which lets players win tickets if they avoid the swings and roundabouts obstacles and hit the win holes at the back of the playing field.