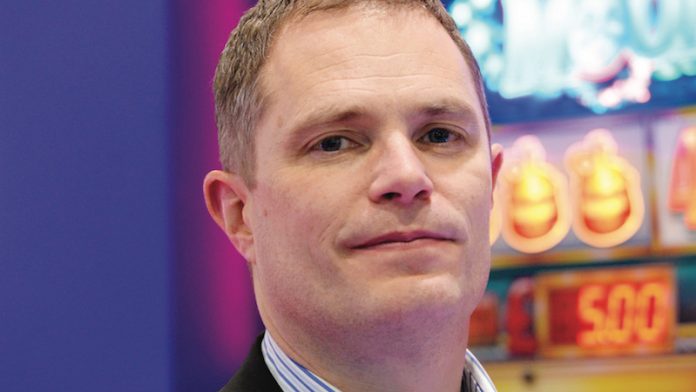 Reflex Gaming returned to the London ExCeL Center for ICE with its three-player Lady Luck Moonstruck, a Cat C/D machine that proved extremely popular at EAG only a few weeks earlier.

Mat Ingram, chief product officer at Reflex, explained just how much interest the multi-feature game has garnered over the two events – pointing to his sales team who were still busy with ‘moonstruck’ visitors.

“It’s doing really well, we’re selling them like hotcakes,” he said. “We were at EAG, which is obviously a more focussed show, and they did especially well, but even here as you can see our sales guy is still selling it during the last minute of the show.”

Part of the machines appeal is its eye-catching cabinet, designed with three playable slots under a large spin-the-wheel feature. Combined with a strong game design, Ingram believes that Moonstruck brings a unique offering to the arcade floor.

“It’s bright, it’s colourful and we got the maths right,” Ingram said. “With all those combined it stands out in a crowd, particularly in a crowd where other manufacturers have dominated for a while, and we have come in with something different.”

Moonstruck has also proven its versatility in the market, with sales of the lower-stake model impressing Ingram over the last 12 months.

“It’s actually done even better on Cat D than it has on Cat C, so I’m really pleased about that,” he added. “It’s a fun machine, the low-stake players are really enjoying the experience.”

Reflex is also testing a new range of high tech AWPs, some of which are brand new experiments following a continued stream of investment into the company’s research and development department.

Ingram explained how Reflex are committed to developing new games: “AWPs are important to us and a big part of what we do. We’re experimenting with some new maths profiles and game design ideas so we’re really keen to test those out and see what works. The company is spending money on people, investing a lot in our product team to bring in the best game producers.”