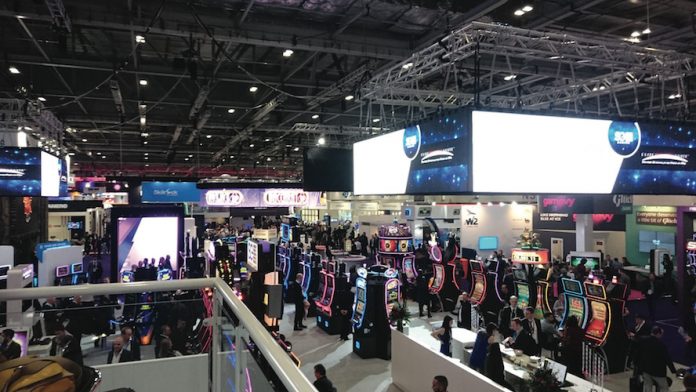 “We are delighted to introduce this new sitdown model to the arcade and bingo sector, building on the success of the T8 terminal and strengthening our product offering,” he said. “The new terminal combines modern hardware design, our technology platforms and leading content and shows SG Gaming’s commitment to continually improving the player experience and support for operators across the arcade and bingo sector.”

The T8, designed for seated play, has a three point adjustable screen, allowing operators to angle the screen to improve playability, adapt to the playing environment and accommodate player preferences invenue.

Another offering on the SG Gaming stand for the arcade and bingo sector was the company’s Riveria cabinet, which is augmented by a library of game content that offers a £10,000 jackpot based on player-favorite game titles such as Action Bank and Spartacus of Rome.

The company’s ICE display also featured new game content and platforms, including titles such as Emperor’s Treasure, Jewel In The Crown, Legend of the Pharaohs and many more.