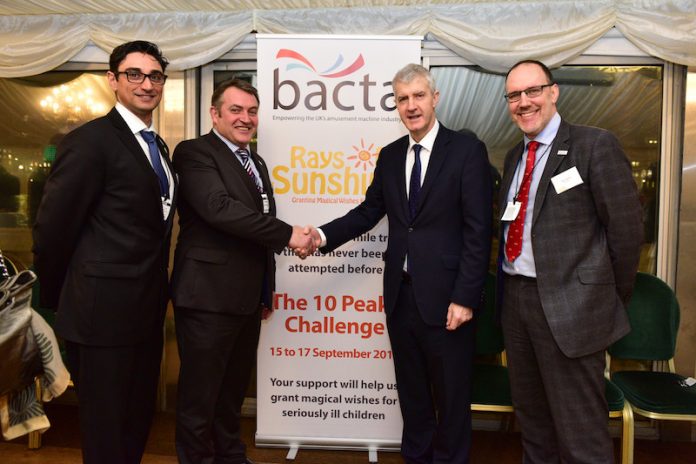 The bacta charitable trust has set itself an ambitious target of increasing its contribution to the Rays of Sunshine charity to over £500,000 by the end of 2017.

The target, which equates to an additional £190,000, was announced at the parliamentary reception for the charity held in the House of Commons last week and attended by 14 MPs including four ministers. MPs and bacta members met with 15 year old Caitlin Kydd, a Rays of Sunshine Wish child, who developed #Kisses4Wishes. Caitlin has survived bone cancer twice and was granted a wish in 2013. She has been working tirelessly to help other seriously ill children get their wishes.

Jane Sharpe, CEO of Rays of Sunshine said: “Over the past six years, bacta members have worked tirelessly to help Rays of Sunshine grant magical wishes for seriously ill children across the UK. Members have taken on a host of challenges all in the name of Rays of Sunshine, including cycling 100 miles across London, taking on all 26.2 miles of the London Marathon and will be taking on 10 Peaks in 24 hours! In addition, some of the members have rolled out Tickets for Wishes, a fantastic campaign that encourages customers to donate their unused tickets to Rays of Sunshine which on its own, has raised £10,000!

“Through their combined efforts, bacta has contributed over £300,000 which has enabled us to grant the greatest wishes of many seriously ill children up and down the country. The Parliamentary Reception was a fantastic way to celebrate all that bacta and Rays of Sunshine have achieved together and we were blown away by the continued generosity of those who attended, raising an amazing £8,000+ on the evening.”

Jason Frost, President of bacta added: “First of all, I would like to thank Sir Peter Bottomley MP for sponsoring this fantastic event and the bacta members who turned out in great numbers for their continued support of our charity fundraising. Rays of Sunshine is a fabulous charity that bacta and its members have supported for nearly six years, raising over £300,000. To see how that support has been translated by Rays of Sunshine into giving such pleasure and joy to children with life-limiting and terminal illnesses has touched every single person in the amusement machine industry. I am always amazed by the generosity of our industry which I am very proud to be part of and I would like to thank all the bacta members who have helped make wishes come true. It was a privilege to celebrate our relationship with some of the children who have received these wishes.”

The money raised at the Parliamentary Reception will go towards fulfilling 10 year old Paige’s wish to go to Center Parcs with her family. Paige is currently living with Epilepsy and Microcephaly and is being treated at Alder Hey Children’s Hospital. Additionally, one member donated a jukebox valued at £5,000 to be auctioned with the proceeds divided between two charities – one being Rays of Sunshine.