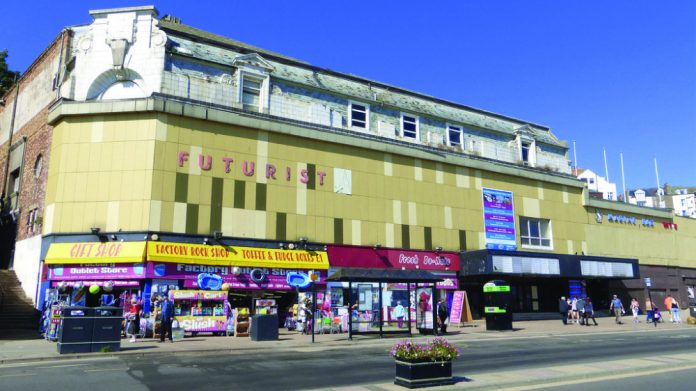 Scarborough is one of the jewels on the North Sea coast, but it has a blot on its landscape – a boarded up old fashioned building wasting crucial leisure and family entertainment space. Well that is about to change with the local council approving a demolition and replacement job that will bring a new amusement park-style attraction to the town.

The probability of a new indoor amusement park coming to Scarborough has increased after the resort’s council voted in favour of demolishing a building on its proposed site.

In what was hailed as a “momentous decision”, last week Scarborough Borough councillors voted 22 to 21 in favour of spending £4m to knock down the seafront Futurist Theatre.

The outcome paves the way for the creation of a sister park to the Flamingo Land Resort, 20 miles inland from Scarborough.

Council leader Derek Bastiman said: “It is a momentous decision for Scarborough because it will rid us of the eyesore which has been boarded up. There has been £1.6m paid in subsidy to the operator of that building in the last 20 years, so I am happy with the decision.

“What is proposed for the new site will be an improvement and an attraction that will help keep Scarborough to the forefront of seaside entertainment.

“I am Scarborough born and bred and I am immensely proud of this town. I will be sorry to see the Futurist go, but it’s not the most iconic of buildings now and we need to move on.

“There will be a timeline for demolition, but it will go back to the planning committee so we do not know of any timescale at this time. I am pleased with the decision and whatever goes on that site will be infinitely better than what stands there today.”

Campaigners hoping to save and restore the theatre, which has hosted stars including the Beatles and The Who but has been closed since 2014, reacted angrily to the decision and vowed to continue their efforts.

Gordon Gibb, the chief executive of Flamingo Land, said: “We completely respect those who have an alternative opinion of what should be done with the Futurist site.

“Now that a decision has been made it is our hope that anyone with Scarborough’s best interests at heart embrace this fantastic opportunity for the town.”