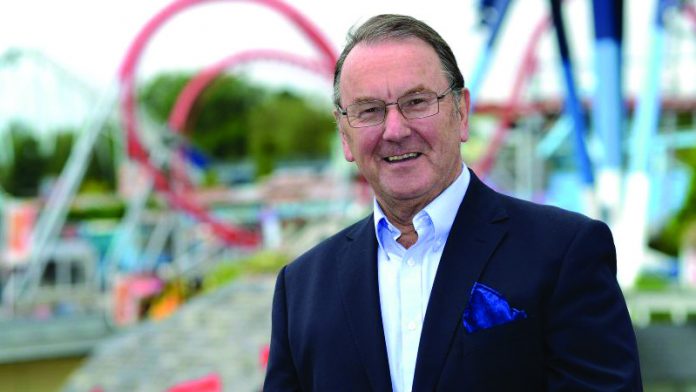 Colin Bryan, current chief executive and son of the founders of Drayton Manor Park, has received an OBE in the New Year’s Honours list.

In recognition of his charity work and ongoing contribution to tourism, Colin Bryan, chief executive at Staffordshire’s Drayton Manor Park, was awarded an OBE in the New Year’s Honours list.

Over the years, Bryan has remained demonstrably committed to his involvement in the tourist attraction founded in post-war Britain by his parents, George and Vera Bryan OBE, and he is passionate about the park, his employees and the people it serves.

He explained: “My parents opened the park in 1950 and I have been working there since I was a young boy, when my first job was helping them clear the rubble with my miniature wheelbarrow. I have worked in nearly every department over the years and qualified as a chef to really understand what makes the park and catering companies what they are today. It is in my blood so I feel very honoured to receive this OBE.”

Back in 1949, George and Vera Bryan OBE purchased a derelict property in Staffordshire with 80 acres of landing, with the dream of turning it into an affordable, reachable and family friendly leisure park.

Today, 66 years after it was first founded, Drayton Manor is one of the top five most popular theme parks in the UK. Bryan added: “This park truly is a family affair. It began with my parents’ passion to create somewhere magical for people to visit after the war. It is our whole family’s life works and I couldn’t be more proud.”

As well as being heavily involved with the park, Bryan also contributes to a number of charities and community initiatives. He continues the work his father began with Rotary in 1989 by providing an annual fun day out for over 5,000 disadvantaged, disabled and special needs children. Bryan is also a patron of KidsOut, which is also the park’s main charity.

Bryan concluded: “I still love watching our guests have fun, enjoying themselves, knowing I have played a part in that.”