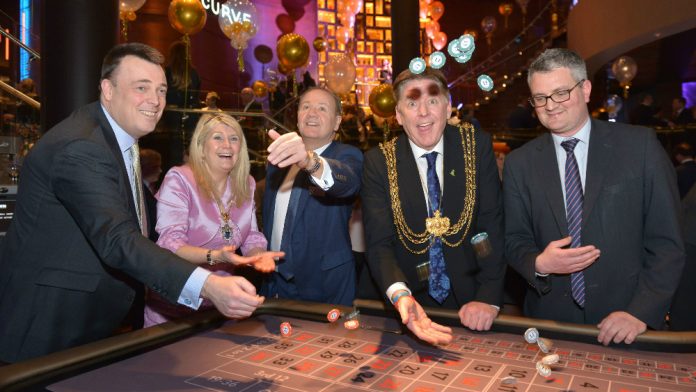 The star-studded grand opening ceremony of a ‘Super Casino’ in Leeds has been attended by thousands in the UK city.

Thousands of VIPs and industry delegates attended the grand opening of a new ‘Super Casino’ in Leeds on Thursday, January 26, 2017.

The new Victoria Gate Casino, which cost £30m, is the third largest casino in the UK and its operator claims will be a key contributor to the northern city.

“Victoria Gate Casino is a stylish, buzzing entertainment hub in the heart of Leeds city centre where everyone from first-time visitors and passers-by to top poker players are catered for.

“It’s a pivotal moment for Leeds to have an entertainment venue on such a grand scale and we’re thrilled to be contributing to the city’s already thriving leisure offering.”

Thursday evening began with a gala invitation-only event for 1,200 VIPs – which included the official ribbon cutting and first spin of the roulette wheel – before the doors opened to the general public at 9pm.

Visitors experienced the casino’s three venues, Live Bar, which has a partnership with Molson Coors, and is the hub of the casino with wall-to-wall, state-of-the-art screens displaying the latest sports and live action.

Mr Herd added: “The casino has already had a positive impact on the region, creating more than 200 jobs – 90 per cent of which have been sourced from within the Leeds City Region.

“We were overwhelmed with responses, receiving more than 5,000 job applications, and it speaks volumes for how keen people are to be a part of such an exciting project.

“We have also worked hard to employ those not in education, training or employment, and help get them back on the career ladder again.”

Councillor James Lewis, Deputy Leader of Leeds City Council, said: “I’m very pleased that we’ve been able to help secure so many jobs for people in the Leeds area by working closely with GGV during the casino’s development.

“We have also helped them put in place policies to identify and tackle potential problem gambling and they are taking their responsibilities seriously.

“Victoria Gate is already proving itself to be a great success, attracting many visitors from a wide area and its new casino should prove a further boost to the local economy.”

“At its opening in October 2016, the scheme transformed Leeds’ retail offer and today the casino’s arrival provides the city with a unique and vibrant entertainment experience.”

This article was originally published on www.casino-review.co