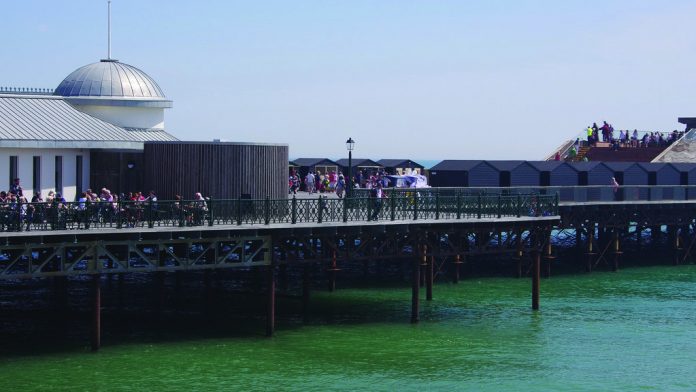 Brighton’s i360 ‘vertical pier’ and Hastings Pier have been included in The Times newspaper’s list of the top 10 buildings of 2016.

The list, compiled by critic Jonathan Morrison to celebrate the best architectural creations of the past year, offered praise for the designers of both piers.

The i360 was ranked at six, with Hastings Pier one behind in seventh. London’s Newport Street Gallery topped the list.

Applauding i360 creator Marks Barfield, Morrison commented: “There’s no doubt that the 162m pole – described by the architects, at least, as a vertical pier – is an interesting, rather fun, addition to the Brighton seafront. It is one heck of a feat of engineering.”

The attraction opened at the start of August last year and welcomed 100,000 visitors within three weeks of its first ‘flight’.

Speaking about Hastings Pier designer dRMM, Morrison said: “The architects courted controversy by welcoming what the fire had done to sweep away the clutter, but the minimalist design has slowly won over the locals and the town has never looked better.”

The pier, which was almost totally destroyed by a fire in October 2010, reopened in April last year following a £14m renovation.

It is the attraction’s second cause for celebration in the last fortnight, after it discovered it had also been included in the longlist for the Royal Institute of British Architects Journal’s MacEwen Award.

The award was established to recognise ‘architecture for the common good’ that serves to improve people’s lives rather than acting solely as a statement of style.

RIBAJ praised dRMM for valuing sociability over commerciality by leaving the end of the pier as an open space, allowing it to be used for a variety of events.