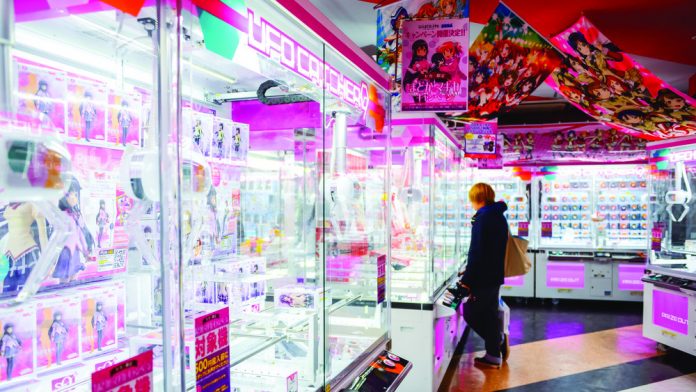 The British holiday could hardly be thought of without the archetypal amusement arcade. But there is another country where the arcade industry holds a similar pride of place in the nation’s culture: Japan.

Game-centres, or what the Japanese call “geesen”, are thriving in the land of the rising sun. From the oodles of small scale venues that litter Japan’s back alleys, to the Sega Akihabara, a giant arcade located in front of JR Akihabara Station in Tokyo, game centres are not losing any of their appeal to less social forms of gaming.

There are 5,772 registered arcades in Japan, which rake in a staggering Y470bn – or £3.2bn, as well as a further 10,297 small game spaces that don’t require licences. Part of the reason for this success is due to a highly effective trade body.

“The basic charge for playing a game is only 100 yen [70p]; anyone in any age bracket can enjoy arcade games easily and casually,” said Keiichi Kouno, managing director of All Nippon Amusement Machine Operator’s Union. “We have kept this ‘one-coin’ policy for 30 years.”

The traditional variety of games available is similar to those found in the UK, albeit with a few twists. Shooting games; simulation games such as racing; prize machines such as cranes and a range of gamblified machines: slot machines, mahjong and virtual horse racing betting. Less common in the UK, however, are photo booths, or purikura, a vast industry in Japan.

“Purikura is especially popular among girls,” Kouno said. “Although it is not a game machine by the strictest of definitions, purikura was originally introduced as part of the arcade scene and continues to be a favourite. The latest CG technology enables them to modify their face and hair to their tastes before printing.”

Music and dancing simulators, “maimai”, are also very common. But unlike the dance games in the UK, a camera is positioned above the player, with the audience in the background, simulating a stage performance. Oddly, video terminals akin to shoot-em-ups, but with a romantic gamified theme are also popular.

While Japan was a pioneer in the 80s wave of video arcade games, and rode that wave for perhaps longer than most did in the west, they too have suffered from the advanced capabilities of home consoles. The Japanese have however, moved efficiently with the times, adapting their offering to more social aspects of gaming, amplifying those features that can’t be done at home.

“Doing games in the arcade is just like enjoying live music,” said a Sega employee. “It is fun to share time and space with other game lovers.”

The rise of VR promises to transform the Japanese arcade once more, and both the arcades’ union and operators themselves are not missing the trick. Capcom has recently created a Godzilla-like VR simulator where players can rampage as Kaiju through Tokyo. With touch sensors attached to hands and feet, players can tear bridges apart and snatch helicopters from the sky. Location-based VR entertainment firm Zero Latency’s V Play Reality is also set to be a hit in Japan, recently announcing a $7m rollout of its products across the country in 2017.