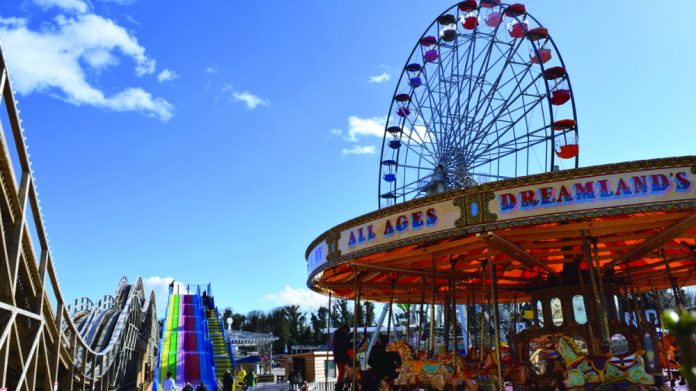 Operators of the Dreamland theme park, which went into administration in May 2016, have agreed to extend its loan facility with Cayman Island-based hedge fund company, Arrowgrass, to almost £10m in order to prepare the site for sale.

The sorry tale of Margate’s troubled leisure complex Dreamland continues, albeit with an end-game in mind. Having initially been loaned  £600,000 in May 2106, an agreement has now been reached between operators Sands Heritage, administrators Duff and Phelps, and Arrowgrass to increase the park’s loan amount to  £9.915m to prepare the site ready for sale.

The Dreamland story is not a comfortable one following its euphoric re-opening in June 2015.  Just eleven months into its revival, the attraction amassed debts of £14.3m after delays to building works, summer closures and delayed certifications following its purchase of the site from Thanet council.

A report issued to the operator’s creditors last year warned a sale was likely in the future if not immediately, and now administrators have stated that the money from Arrowgrass is earmarked for investment within the site in order to prepare it for a potential sale later in the year.

Bernie Morgan, chair of the Dreamland Trust, described the new investment agreement as a “Big milestone in the life of Dreamland.” She added: “We know that Dreamland needs a lot more investment. We know the lease protects its life as a heritage amusement park, so I think it’s a good thing.”

The investment, and proposed sale has drawn ire from local figures, former Thanet councillor Ian Driver said: “The original plan for Dreamland was that it would be managed by a charitable trust and that profits would be invested back into the park and the local community”

He added that: “This massive public investment is now helping to enrich people who are already incredibly wealthy, instead of helping to tackle poverty and deprivation in Margate.”

Toby Hunter of the Margate Town Centre Regeneration Company (MTCRC) was more positive about the news, with his firm currently chasing Thanet District Council for compensation regarding their compulsory purchase order of the site.

“We’re happy in some ways, if Arrowgrass have extended it and intend to buy the freehold of the site that might give Thanet some money which they have not got.”

MTCRC believe it is owed more than £15m, although the council’s estimation of the value of the land is thought to be significantly lower, with an official figure expected to be released in the coming weeks.

Thanet North MP Sir Roger Gale remains hopeful about the site and the wider area despite the troubles that have faced Dreamland.

“Dreamland is not just an amusement park it’s a 365-day-a-year leisure complex, it’s a unique facility, it’s got its own magic and its potential is huge…Margate still has plenty to offer and I would argue the best is yet to come.”