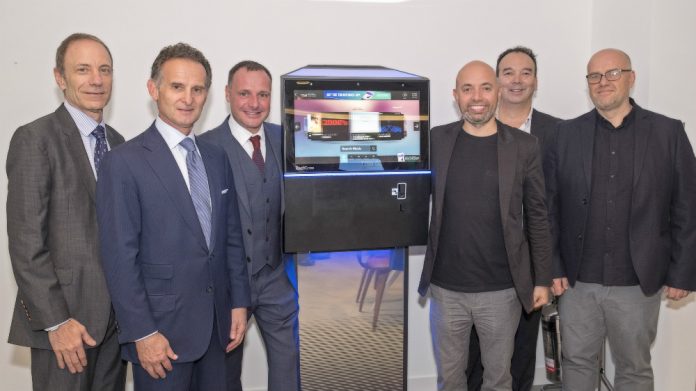 In an exclusive interview, Sound Leisure’s MD Chris Black discusses the Playdium jukebox, his 30 years in the industry and the challenges facing the sector in 2017.

In the period that you have been working in the jukebox industry how have you seen the dynamics of the market change?

2017 is my 31st year in the industry and as you can appreciate, I have seen many changes. From a legal or regulatory perspective I guess the two most significant have been the ruling that prevented brewers from operating their own pubs and probably the smoking ban which had a big effect on the habits of the population in relation to how it used entertainment, particularly in the pub. The pace and cost of technology is central to the changes we encounter on a daily basis and in many ways take for granted. In our own sector, the Playdium is a prime example of how a company, TouchTunes, has been able to use technology to improve the customer experience.

The Playdium is a big commitment from TouchTunes, from yourselves and from Soundnet, how has the market responded and what feedback have you received?

It was time for a change in the market and sometimes you have to think out of the box for both yourself and the industry. The jukebox space is very crowded and will probably become more so over the years. As the motor industry has done successfully with major partnerships, it was time for three leading players in the field to combine their skills and resources to try and create a sustainable and profitable future for all parties. We are still only three months in and we still have a long way to go but the initial results are very positive. Playdium is a different offer than we have previously sold and initially things were slow, however once customers realised that we weren’t running to the hills and that we are all still 100% committed to the sector things have begun to change. We have a good number machines out on site and the cash in box has been very encouraging.

What needs to be done to place pay to play music higher up the agenda for pubs and clubs and to connect with the Spotify generation?

The obvious answer here is for the machine to take more money, which is easier said than done. Hence the change in our thinking to partner TouchTunes. The machines need to be up to date with music but also able to interact with the latest social trends such as mobile phones and above all be connected. In the past we have been way too laid back regarding connectivity but this is probably the most important point as it is the only way to ensure that the jukes remain relevant with the younger audience. There are many different programs currently under test that may or may not see the light of day in the coming years, however the ones that are successful will ensure that the Jukes remain relevant. The use of the App is a major way of connecting with the under 35’s.

What do you perceive to be the big challenges facing the sector in 2017 and is the glass half full or half empty for the jukebox?

The glass is always half full, if not you may as well stay at home. As always there will be challenges, the pub retail sector is going through some big changes and we are once again likely to see consolidation which causes unease. This is not the ideal platform to sell machines in as there is likely to be a lot of movement in the market place and customers hold back until they see how the dust settles. However saying that, the Playdium is being seen as a new era machine, a game changer that will end the stalemate that has been around for too long.

The industry has spent a lot of money researching attitudes towards gaming in AGCs and Bingo Clubs: do you think more should be done to research the positive role that music can play in pubs and clubs in terms of footfall, retention and spend?

I believe that everyone understands that music has a positive role to play in any venue, it just seems that in the vast majority of sites that there is no monetary value placed on it. I have just returned from a show in Vegas and whilst walking down the street to the exhibition found myself humming away and in a good mood. It was probably 10 minutes into the walk that I realised what a positive effect the playing of music on the streets had. As an operator I get upset by the amount of times we receive calls from sites asking for the machine to be placed in free play for the night so that the bar will be attractive to the clients. Somehow, on some sites we have sleep walked into using the jukebox as a tool to keep sites happy, not for the operator to make money on. The easiest way surely to fill a quiet pub would be to offer free drinks, not music!