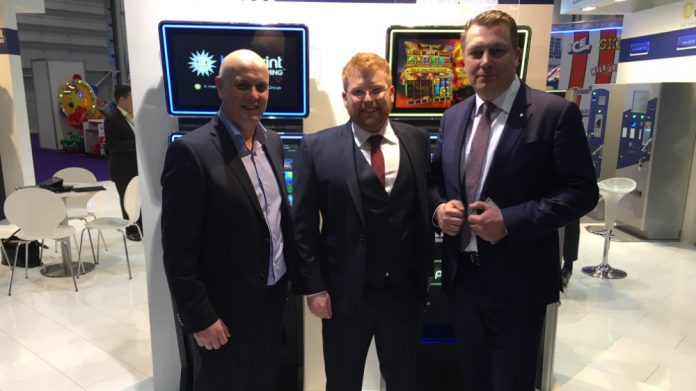 Whilst many visitors were still arriving at EAG eager to see what the show had to offer, Blueprint machines had already signed a major investment deal with leading independent operator, Bob Rudd. The deal for 500 King of Games category C units was completed within the first hour of the trade show and Bob Rudd managing director, Nick Rudd believes it stands as testament to the ongoing investment programme the supplier has with the product range.

The deal comes following continued joint development, which has cemented the excellent performance of the compendium games. King of Games is the UK market leader for digital Category C, with performance at more than 25 per cent ahead of the competition. Over 4000 King of Games units were sited by the end of last year, roughly 70% of the digital footprint in the pub sector and the number is growing weekly.

“We are thrilled to kick off EAG 2017 with such a large order from Bob Rudd, one of the most highly respected independent operators in the country.”

Starting in Newcastle upon Tyne in 1989, Bob Rudd is now one of the largest independent suppliers across the UK and is expanding rapidly. The company now operate from Newcastle, Leeds, Nottingham, Wigan and Keswick.

“We are thrilled to kick off EAG 2017 with such a large order from Bob Rudd, one of the most highly respected independent operators in the country,” said Blueprint Machines’ managing director, Simon Barff. “This order goes to show that King of Games is the undisputed market leader for digital Category C in the UK.”

“This order is part of an ongoing investment programme we have embarked upon with the King of Games product,” said Nick Rudd, managing director of Bob Rudd. “We have always spearheaded the introduction of digital product into the retail pub sector and this order shows that our digital strategy is paying off. We are also looking forward to receiving our first delivery of the new Alphastar.”

The agreement signalled a strong start for the London trade show and not only highlighted the quality of the Blueprint products on the floor, but the commitment to product innovation and development at Bob Rudd.