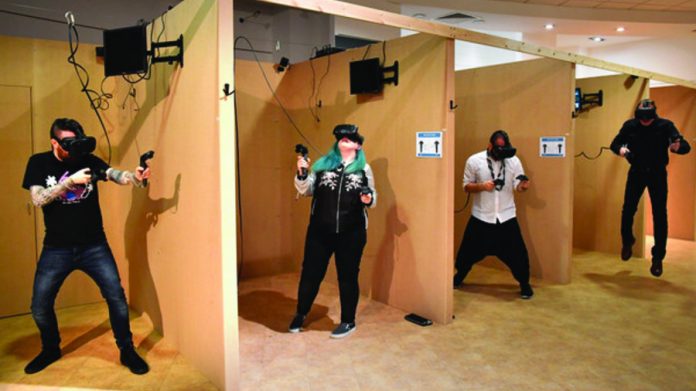 Edinburgh welcomed its first Virtual Reality arcade, E-VR, to Ocean Terminal shopping centre on 1 December with much enthusiasm from visitors.

Owner Peter Burnett said: “The early response from the public has been overwhelming, partially because we are situated in a busy shopping mall. On the day before we opened, we allowed people to come in and have a look at the equipment, and try some of the short experiences we offer, and over 100 people tried it out, including children, people in their 70s, wheelchair users, gamers and curious passers by.”

Despite proving to be highly popular, only a handful of VR arcades exist around the world, and then mostly in the US, Canada and China. Although it is possible to book some VR experiences in the UK, E-VR is the only one where people are free to walk in and try a variety of games, apps and experiences.

Lynzi Leroy, also the owner of E-VR, said: “We’re really new on the market to the point where we’re still learning about the technology. In China they are rolling these out quite quickly and in Canada there is a few and I think there is a couple in England just now, so it’s still very new and we need to see how popular it is here and in Scotland. But the feedback we have had so far is that it’s been really great.”

Burnett and Leroy, have created a hotspot for virtual reality in Scotland. Visitors settle into one of the seven VR pods, put on an HTC Vive portable headset and become immersed in the virtual world.

Currently, the arcade has around 16 games and virtual experiences available. Tying in with the holiday season, one of the games, Snow Fortress VR, lets users participate in a virtual snowball fight. Burnett said that some games developers have also introduced Christmas themed games for December.

Burnett believes that VR could be a wonderful teaching tool. He added: “Scotland has a thriving tech sector and we are inviting young developers working in health and education to try the equipment with their own applications. We are working with HTC, the makers of the Vive headset, and already we have been approached by some developers who are keen to see what VR can do for their own projects.”

He hopes that this arcade will encourage similar arcades to open across Britain in 2017.