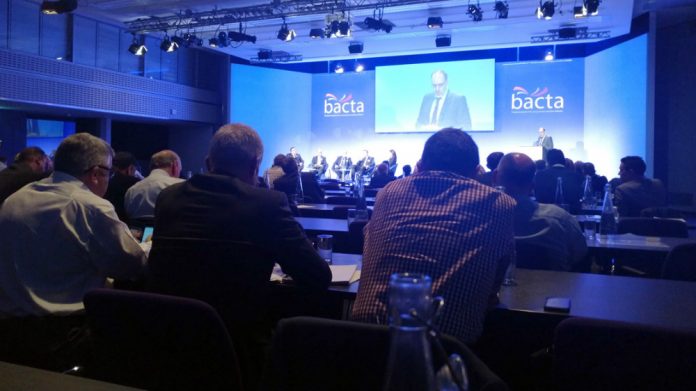 Although the post-lunch Challenge Panel touched on a range of issues concerning the future of the coin-op industry, it was once again debit cards which dominated proceedings, as the trade body’s division leaders stressed the importance of rapid action.

One of Bacta president Jason Frost’s key internal contributions during this past year has been the work of his Strategy Committee. Charged with looking into the future of coin-op, his group produced a punchy Strategy Document which details how they believe the industry will look in 2030.

As part of the Convention, the leaders of Bacta’s five various divisions took to the stage to debate the key points of this document, picking out the various challenges and merits they presented. On the dais were James Miller (Division 1), Peter Davies (Division 2), Jason Frost (Division 3) and Tony Boulton (Division 4). They were joined by Katherine Morgan of Interel, which has recently been re-hired by Bacta to lead its lobbying efforts.

The most charged issue was one which had been touched on multiple times throughout the day – debit cards and contactless payment.

Jason Frost opened the debate: “There’s a coding system for when you use your card. So that when you buy fuel, for instance, the card can actually be blocked specifically for buying fuel. I think that the powers that be mustn’t dismiss the possibility of paying by card. If people had the ability to block their cards for making certain kinds of payment (i.e. gaming), it would actually work as a social responsibility tool and work to help people self-exclude.”

The topic was picked up by FEC operator James Miller, who said that, “it’s already taking over everything.” He also noted that the stigma around card payments was overblown, considering that the Government had already approved methods which essentially allow for card-based play.

“We already have a method, that’s been approved, for greater numbers of B3s in FECs, via tablets,” said Miller. “Which is already a method to take payments on a machine, via a card – be that a TITO terminal or whatever. It’s not the solution that we want, but it should be explored without generating the headlines.”

Peter Davies of Gamestec was also quizzed on how the growth in cashless was affecting the pub market, where the impact is expected to be felt most keenly. He backed up this suggesting, noting that, “the managed pub groups in the UK are reporting that more than 50 percent of their over-the-counter payments are via contactless. People don’t carry cash any more and the younger generation, which is a missed market for us in the pubs, definitely don’t carry cash. So it’s something that’s really important to us.”

“When we were looking at the document this was a 2030 view of the future, but I think the reality is that although the UK is a long way behind the rest of Europe,” added Project’s Tony Boulton. “So when we’re looking forward, at some point we’ve got to make that step. We will become a cashless society and when we do, if we don’t progress with it we will just get left behind. And I think that the Commission and regulators have to appreciate that ourselves and our customers have businesses to run.”