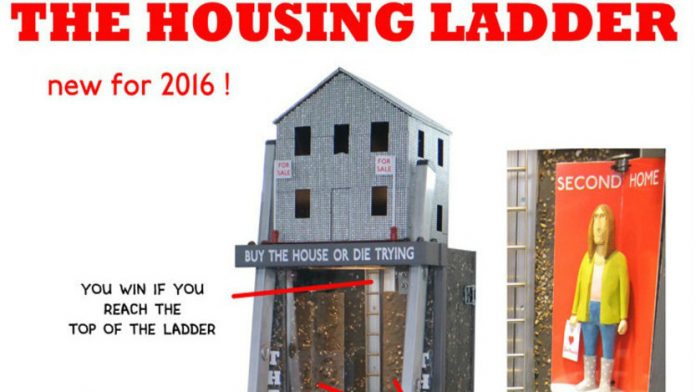 In the media this week, the Guardian has been covering the latest madcap arcade machine by Tim Hunkin, this time focussing on Britain’s housing crisis.

Britain’s housing crisis has been turned into a spoof arcade game where players have to dodge second-home owners and foreign investors to “buy a house or die trying”.

The Housing Ladder slot machine, by the Suffolk-based cartoonist and inventor Tim Hunkin, uses treadmill steps on an actual ladder to move an automated figure towards the prize of a house encrusted in fake diamonds.

If players take a step when a housing villain appears, the automated climber slides to the bottom. Villains include a developer clasping a mobile phone, and a buy-to-let landlord with a tenancy agreement.

The game has three skill levels depending on resources: hard for no savings, quite easy for “bank of mummy and daddy” and “easy peasy” for offshore funds. And there’s an age gauge that signals “game over” if you don’t reach the house by the time you are 80.

The Housing Ladder will be unveiled at Hunkin’s London alternative arcade, Novelty Automation, on Thursday.

It will eventually be installed at his Under the Pier show in Southwold on the Suffolk coast where Hunkin says it was “battle hardened” this summer to “iron out problems”. Other games on the pier include his “whack a banker game” and a mobility masterclass where players try to cross a motorway using a zimmer frame.

Hunkin’s latest game takes a swipe at affluent incomers who have priced locals out of the Suffolk housing market. One of the baddies in the game is a second-home owner clasping a “I love Southwold” bag.

He said The Housing Ladder was inspired by the plight of young people trying to find a home in London. “I employ several part-timers to man Novelty Automation and their tales of trying to find somewhere to live are crazy. They have to move out of London because of it,” he told the Guardian.

“I don’t think political art has an enormous effect, but in the short term it is satisfying to reinforce people’s disrespect of the villains.”