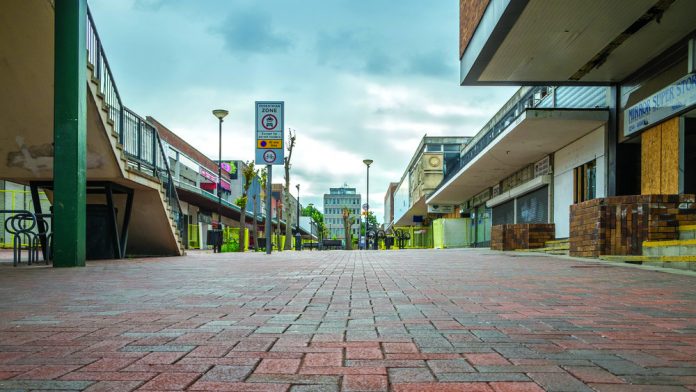 The rise of e-retailers means demand for shopfronts is plummeting nationwide, yet rather than falling in tandem as they should, business rates are going up. Operators discuss why this is, and how leaning on shopkeepers is only making things worse for everyone.

When the market for mobile phones exploded in the late nineties, high street landlords were inundated with demand for their shopfronts, as a wave of new companies swooped in, willing to pay over the odds for representation. Naturally rents rose with demand, and as local surveyors recorded this lift, rateable values rose too, and everyone ended up paying more in business rates.

And so goes the logic of business rates and rateable value. When this process goes into reverse however – when demand falls, and rents fall – rather than falling with them, business rates have been going up.

“Property values have fallen everywhere in the high street,” said Frankie Bailey owner of Bailey’s AGC in Barrow, “but rates don’t reflect that, if anything they go up.

The Federation for Small Businesses is concerned about the situation, and has submitted its proposals to the treasury ahead of next week’s Autumn Statement next week. It is asking for an extension to Small Business Rate Relief, so the smallest businesses continue to be exempt.

“I would estimate at least 30-40 percent of shop units are empty in the pedestrianised section, yet the rateable values have doubled.”

But for Ray Stewart, owner of a number of AGCs in the South of England, such a measure only postpones facing up to a much wider problem: that society is changing, and high streets shopping is losing ground to internet retailers. Rather than confronting this fact, cash strapped local councils punish those business that are eligible for rates. As a result, the anomaly of business rates becomes both product and producer of dying high streets. Stewart gives the example of Aldershot where he runs one arcade, a town suffering from the closure of an M&S in April.

“Property prices are not rising in Aldershot; demand is falling,” says Stewart. “I would estimate at least 30-40 percent of shop units are empty in the pedestrianised section, yet the rateable values have doubled. The closure of shops damages the footfall in the town, which further reduces the ability of other shops to pay the rates. You end up getting into a downward spiral.”

Emblematic of the absurd system, Stewart cites the decades-old rule than even if lease holders improve their property at their own expense, say with air conditioning, the rateable value increases and the business effectively pays an extra tax.

“You’re the guy who pays for the installation, you pay for the electricity, you pay the maintenance, you pay for the repairs upgrades and replacement of it. And yet you pay the tax to the local authority on that through your rates. It’s outrageous, it’s not what rates are about.”

Both Bailey and Stewart acknowledge that internet retailers are taking away much of the footfall, yet they don’t pay high street rates because they operate out of much cheaper warehouses in the country. But passing on the shortfall to them might not be a simple solution. “They will argue they pay enough taxes in providing deliveries: employing drivers, fuel duty, road tax and so on,” Stewart points out. “It’s a very complicated problem, there’s never a silver bullet.”

Stewart argues that rates need to be “a fair reflection of the market at the time, not based on historical values;” local authorities need to accept they can’t keep tapping shopkeepers to fill the holes in their budgets; and planning departments need to find affordable uses for empty spaces. “But,” he reiterates, “extending relief will only create another hole and postpone the problem.”

“What do they call it? Kicking it into the long grass – making it a problem for the future rather than dealing with it. Politicians are very adept at doing that, because nobody wants to take responsibility.”