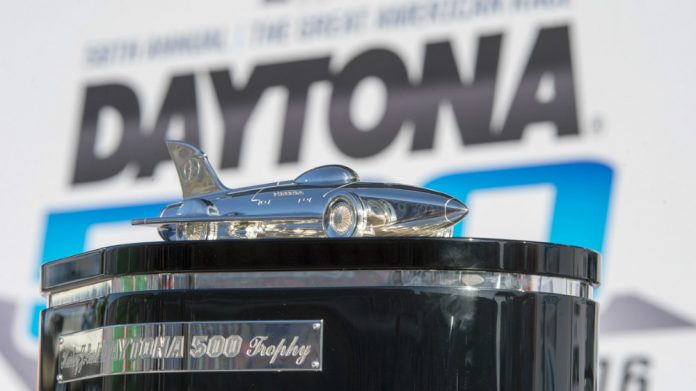 Daytona is returning to arcades, as Sega prepares to revive one of its best love racing franchises with an eye-catching new cabinet and a raft of improved features.

Sega has announced that it is to relaunch a much-loved arcade classic in the form of Daytona 3 Championship USA. This new entry in the video racing series that first debuted in 1994 will feature three new tracks, including a recreation of the newly renovated and eponymous Daytona International Speedway.

As a nod to the series’ history, this fresh release will also include remastered versions of three classic tracks that featured in the original series. These will be joined by new cars and new game modes as part of a complete franchise revamp.

“This is a game changer,” said Patrick Michael, head of local R&D for Sega. “This is a premium game that delivers on quality, player experience and operator features that sets a very high bar for arcade video racing games. Importantly we have based it on the original game engine that gave us the amazing ‘AI’ and ‘catch up’ feeling that we all grew to love.”

Sega is confident that its new Daytona cabinet design will have strong walk-up appeal, thanks in large part to the 47 inch LED monitor on each unit, each of which can be linked for up to eight players to take part in the same race. A live camera will capture the players faces as they compete, beaming their image to competitors as they execute overtake manoeuvres.

“At Sega we have always been passionate about developing the best arcade racing games, it’s part of our DNA, so to have the opportunity to work on this title that truly captures the spirit of the racing scene in Daytona is nothing short of an honour”

Also brand new to Daytona 3 is the ‘Live TV’ inspired spectator video billboard marquee with 27 inch display. This allows spectators to see what’s happening in the race, whether it’s a crash, a pass for position or to find out who’s winning or losing.

The game also has an all-new party mode allowing operators to run special events easily. In addition, to assist engineers, there is the introduction of ‘Sega-IQ Intelligent Service Menus’; these are designed to offer prompts and troubleshooting advice when the onsite technician is maintaining the game.

“At Sega we have always been passionate about developing the best arcade racing games, it’s part of our DNA, so to have the opportunity to work on this title that truly captures the spirit of the racing scene in Daytona is nothing short of an honour,” said Sega’s CEO Paul Williams.

The machine itself will be seen for the first time at the upcoming IAAPA trade show in Orlando, USA.