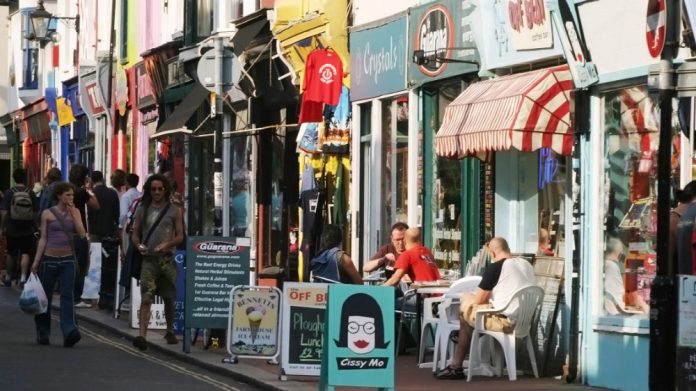 As Weston-super-Mare’s town planners embark on a bold reimagining of the town centre, pier boss Michelle Michael urges them to adopt best practices of other comparative authorities.

The local authority at Weston-super-Mare has unveiled plans for a lanes-style shopping district across three streets in the town centre.

The idea which has been driven in part by Weston’s Business Improvement District (BID) aims to take inspiration from other towns with pedestrian-friendly independent shopping lanes, such as Brighton in Sussex and Melbourne in Australia.

“Creating a ‘lanes’ destination is a long standing idea so it’s great that things are now moving forward,” said Paul Batts, chairman of the BID. “When people visit a new destination, they don’t say, ‘that was a nice Boots’. They remember the unique and individual shops.”

Proposed changes to the three streets (Orchard Street, Meadow Street and Grove Village) so far include expanding the pavement, extending opening hours and improving shop fronts with canopies and fairy lights. But crucially, the plans could include the council taking a more proactive approach to planning, limiting or even excluding chains for the area, and encouraging independents with original ideas that will morph into live music or comedy at night.

The plans come at a defining point for the town, whose college has recently been awarded ‘university’ status along with £19m of Local Enterprise Partnership funding to develop a new campus. Until now students had been day visitors.

“Something like the lanes would be phenomenal for these new students, and the town, if the strategy can be implemented properly.”

Michelle Michael, part-owner of Weston’s Grand Pier, and who sits on the BID as a zone director, suggested that coming in tandem with an influx of resident students, the strategy has the potential to transform the the “local town centre economy overnight.”

“On the touristic side there has been a tendency in town to open more of the same; all that does is you end up sharing the customers,” Michael said. “Something like the lanes would be phenomenal for these new students, and the town, if the strategy can be implemented properly.”

In Brighton, the North Laine district, famous for its glut of independent retailers, is officially designated a ‘conservation area.’ Unlike other parts of town, planning applications are closely vetted to limit or prohibit the proliferation of high street chains, and also to ensure new businesses do not come into conflict with existing ones. Not only does this foster local entrepreneurship, but prevents anonymity and ensures distinctiveness, variety and vibrancy.

Michael, believes that if this is what Weston’s planners hope to achieve, they should speak with their equivalents in Brighton and learn how to make a success of it:

“If Brighton have done that before then in my view the simplest and most effective way for them to do it would be to go up to Brighton as a local authority, share that best practice and try and roll it out down here,” she suggested.

“Anything that creates a different environment will always add to what we offer. It will extend visitor staying time and make it far more interesting for them to be here. We might well stay open later because of it.”