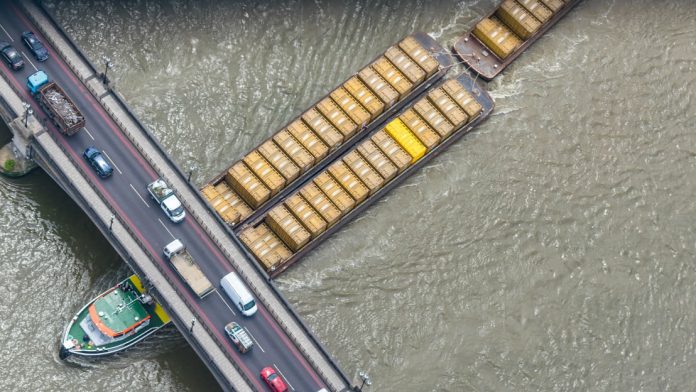 Comparatively slow economic growth in the EU combined with a strong demand for British goods and services elsewhere in the world means that the UK’s biggest trading partner is declining in importance while UK exports benefit from the weak pound.

Since Britain’s vote to leave the EU in June’s referendum, sterling has taken a battering against the US dollar with the the pound falling to a 30-year low.

In dollar terms, the UK was the world’s fourth-biggest exporter by value in 2015, overtaking Japan, although mainly due to movements in the exchange rate.

However the majority of world trade is in goods and the UK is only 10th in the league table when it comes to these exports, falling behind smaller economies such as South Korea.

This could be set to change – in the wake of the Brexit referendum imports to the UK have slid and exports have increased over the summer, helped in part by the slide in the pound.

“The drop has helped our trade with Europe, which is slightly ironic given the context, but it has become 10 percent cheaper for them,” said John Jennings, finance director at JNC Sales. “We’re certainly up on exports to Europe in the last year for the July period so it has been positive on that note.

“From the perspective of our business it did come a bit late for us because the majority of the buying for European arcades has taken place. They generally shut down for August so there was only a limited time frame between the Brexit referendum and the start of the children’s summer holidays in Europe.”

While the rise in exports has benefited the UK’s coin-op sector in the short-term, economic analysts suggests that trade with the EU as a share of Britain’s global commerce could fall to below a third of the UK’s overseas market in the coming decades.

The overall value of exports of goods to EU countries has fallen in recent years, slipping from £165bn in 2011 to £134bn in 2015 while  sales to non-EU countries have risen over the same period from £143bn to £149bn, overtaking the EU.

Outside Europe things are looking positive, in the latest indication of the desire on the part of non-EU countries to do more business with Britain, Canada has opened an export agency – Export Development Canada – in London aiming to boost trade links with its third largest trading partner this September.

“We’ve seen positive signs wider afield, we’ve done more deals in America and we’ve had more interest from Australia and South Africa, given that the fall in stirling is not limited to just the pound against the euro, it’s weakened against the rand and the dollar as well,” added Jennings.

“So in that sense, June’s referendum has once again opened up trading markets that had been a bit quiet in the years since the 2008 recession.”

However the BoE noticed that during the 2007-08 financial crisis, the knock-on effect was much higher. Experts now suggest that if there is a sudden shock to supply in the UK economy – for example if the EU puts up new trade barriers – and a fall in sterling, the inflationary effects will be greater. “We do buy in from the Far East and those imports have become 10 percent more expensive, so there are cost implications there which need to be factored in to our forecast for the forthcoming year and ongoing,” said Jennings.