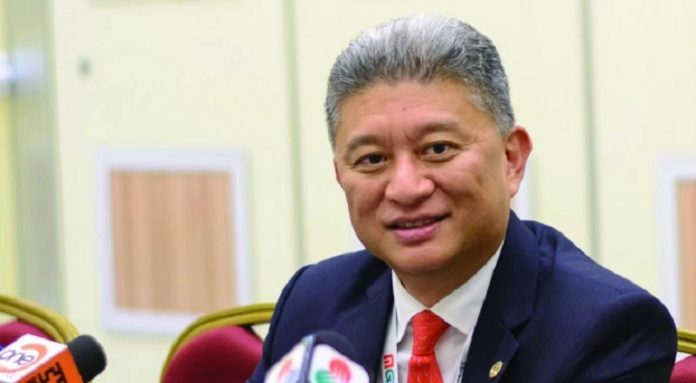 Jay Chun, MD of Paradise Entertainment and LT Game, and Chairman of trade body the Macau Gaming Equipment and Manufacturers Association, is one of the leading luminaries of the Chinese gaming and entertainment industry.

Described by many as ‘the voice of the Macau industry’, Chun has a unique and holistic perspective on the international marketplace. He has pioneered new technology with his revolutionary EGTs and most recently robotic dealers; he has worked to galvanise the Macau industry through the MGEMA during his country’s political and economic transformation; and he continues to channel the Macau industry’s energies by working alongside the SAR Government to push the boundaries of technology and creativity. We met up with the amiable, unflappable but fiercely determined Jay Chun at the G2E exhibition in Las Vegas. And on his agenda was the economy, diversity – and an important number of reference to the ‘technology’ sector.

You’re heading to Vegas this year with a slightly different economic backdrop at home than 2015. Macau ended its 26 month run of declining gaming revenues in August, is this a sign of changing patterns?

JC: Well, it’s a huge lift for the Macau marketplace, that’s for certain. It’s clearly too early to talk of trends and recoveries, but it was definitely what the industry and the members of the MGEMA had long been working for.

The signs are more positive – and there are pointers to a few more good months ahead. But the Macau market is a realistic one, and a resilient one.

We know that there is major work to be done over the next decade. There are billions and billions of dollars already invested in current projects in the SAR – you just have to take a look at the Macau horizon to see the evidence of that.

And there are further billions and billions assigned for new and exciting projects across the city and the locale from the Hong Kong bridge through to new resorts and developments. This is not a region that is shrinking from its economic responsibilities – far from it. We are investing, and investing heavily in our future.

One can’t contest that Macau is a resilient market. It remains the ‘gaming capital of the world’ despite the declining figures over the past two years, and still by a fairly long way. But there is a sense that it’s a city in transition, and with unfinished business on its agenda. Is that a fair assessment?

JC: [Smiles] Is London a city in transition? Is Las Vegas a city constantly reinventing itself? Is Tokyo a city in search of change?

Macau is no different. It’s a city that has to, and more importantly, wants to change. It has to grow, diversify and build new infrastructures. We need to stop thinking of it as simply the gaming capital of the world – it needs to be more than that.

Gaming and entertainment is its economic life source – that’s a statement of the obvious. But there’s more to the city and the region. It’s bringing in huge investment; major trading opportunities across a spectrum of industries; and it’s a perfect haven for technological and innovative forces.

So where does gaming fit into this model?

JC: It remains at the heart. It has provided the economic base of Macau – like it has in many cities around the world.

But gaming is the power source – it’s the electricity of the city. It powers the infrastructure and industries that cities like ours requires.

More importantly, though, is its role in driving technology, investment and finance, new ways to look at content delivery – the development options are endless.

This diversified economic model is our future and we have a willing partner in pushing it forward – the PRC and Macau SAR Governments.

You’re presenting a very interesting viewpoint – it’s almost as if you’re redefining the roles and responsibilities of gaming operatives for the future and preparing the way for a new guard. Are you?

I love new technology and the invigorating opportunities it brings. I love innovation and creativity – and the momentum it has in changing people’s lives. And I like to see this in the business environment. As an industry, we need to explore new frontiers and drive new ideas forward. Technology is the major force behind this, and I’m excited by the prospect of what new innovations and creativity can deliver.

But, I’m also a pragmatist. I know that this cannot be done without Government and independent financial backing. Considered regulation and strong investment is a vital component.

And, actually, this is a theme I’m really keen on exploring at the MGS Summit in November. I believe the industry is at a crucial point – we’re ready for the ‘giant leap forward’.

But the key to this is in the balance of good legislation, confident financial backing and pioneering, innovative technology.

There’s a partnership that’s necessary here – it’s not about new guard, old guard; it’s not about redefining roles and responsibilities. It’s about a new perspective.

A modern vision that brings prosperity to the economy and to our business community.

That’s a timely reference to the MGEMA and its remit. You’re at G2E currently, partly with a trade association hat on; what’s the message?

JC: Macau is open for business. The MGEMA members, many of whom are on the G2E show floor in their own right, are driving innovation and creativity.

The Macau SAR Government is backing our work to build business relationships.

The PRC Government is opening up business opportunities around the whole Asia Pacific continent designed to boost trade.

There’s no better time to invest in Macau and Asia. There’s a strong vision and a committed action plan – I firmly believe that Macau and China has a major contribution to make to the development and growth of our industry across the world.

And the MGS Entertainment Show? Is that where the MGEMA is focusing this message?

JC: Absolutely. The MGS Entertainment Show is here to stay.

It’s an annual fixture on the gaming and entertainment exhibition calendar and will remain so. It’s owned and run by the trade association; it’s backed by the Macau SAR and RPC Governments and it sits at the heart of the Asian marketplace.

No exhibition can offer this balance of support anywhere in the world. It’s a unique selling point that we will continue to drive home to the global market.

If you want to do business in Macau and China – and anywhere in the world for that matter – then MGS is your first port of call.

It’s owned and run by the major businesses not just in Macau and Asia but internationally – the concessionaires in Macau stand side by side with the gaming manufacturers around the world, all the businesses that understand this market and every market on the global stage.

But most importantly, for any show in any country, we are backed by the Government.

MGS is funded by four Macau SAR Government departments. We have a representative from the People’s Republic of China Government sitting on our board as a liaison officer.

No trade show can offer that kind of support and commitment. And we are going to be pushing this partnership over the next three years with a vigour and force.

So what’s in store for the MGS Entertainment Show this year?

JC: I’d like to see a year of consolidation. We have a very ambitious three year vision to unveil to the marketplace and we want businesses to partner with us on this journey.

We have the commitment of major industry forces such as Novomatic pledging their long term support to our direction and huge interest from the technology sector that we want to nurture and develop.

The expansion of our offering to the broad based ‘entertainment’ market is opening the door to the future of our industry – it has to be a show that takes you from the creative concept, through the technological development, to manufacturing, and all the way up to the point of delivery where the customer is king.

That’s a journey that excites me. It connects all the components of our business from conception to consumer.

That’s the MGS Entertainment Show vision. That’s our investment. That’s why the Government is supporting us. And that’s why we are so determined to drive our vision forward.