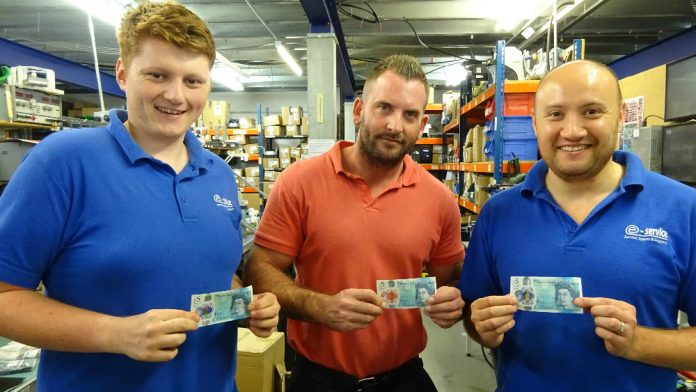 With the new £5 polymer bank note entering circulation just under a month ago, UK operators explain how E-Service supported them through the currency change.

The new £5 polymer bank note entered circulation on 13 September, and operators across the country have been giving their feedback on adapting their machines to the new currency.

Before the notes’ release date, preparation for the change had been taking place for several months at E-Service, who talked to operators and suppliers way in advance to assist them with the launch.

Machine supplier John Marriott, owner of Sterling Amusement Machines, said: “About a year or so ago E-Service called me into a meeting on a one-to-one basis, went through everything, and explained the key features of the new five pound note. They even gave me a viewing of it because they had them well in advance”

As the launch date approached, Marriott explained that he was kept informed of software updates via news bulletins, and he could then update his machines through programming equipment supplied by  E-Service.

He added: “What was beautiful is that all my machines were up-to-date well before launch. Instead of me having to take all my equipment off-site, I could just go onsite and program them myself. It wasn’t a last minute rush and everything was done in good time, and Nick Holmes and his team at E-Service also offered to buy any surplus equipment from me in part-exchange.”

Another customer E-Service have supported during the currency change is Sean Lally, owner of amusement supplier Langlois Son and Partner, who chose their ‘Advance Replacement’ option.

Lally said: “E-Service is just a one-stop shop for me really, and as a small single-site operator, I couldn’t operate without their support and backup through Advance Replacements. It saved me time because if you do get a note acceptor in this way, it’s already programmed and ready to go – so it makes the change over very easy.”

“They did a brilliant job, even going the extra mile and dusting out some of the machines. I’ll absolutely be using them for the new £1 coin.”

Other operators have chosen to have E-Service’s team of field engineers come and help with the switch, which was the case for Paul Lyall, director and chief engineer at Bell Coin, who had 22 bill acceptors changed at his two large amusement complexes.

Lyall said: “They did a brilliant job, even going the extra mile and dusting out some of the machines. I’ll absolutely be using them for the new £1 coin.”

As the release date for the new £1 coin draws closer, E-Service will be preparing operators for the coin’s launch in March 2017. This is closely followed by the £10 polymer banknote in the summer, and the £20 note is before 2020, giving arcade owners and suppliers a significant number of changes to make over the next few years.

“We’re very gratified to hear that so many of our UK clients are pleased with the support they have received from us” confirmed E-Service’s Nick Holmes “These currency changes are always challenging, but can be stress-free and cost-effective when we work closely with our customers”