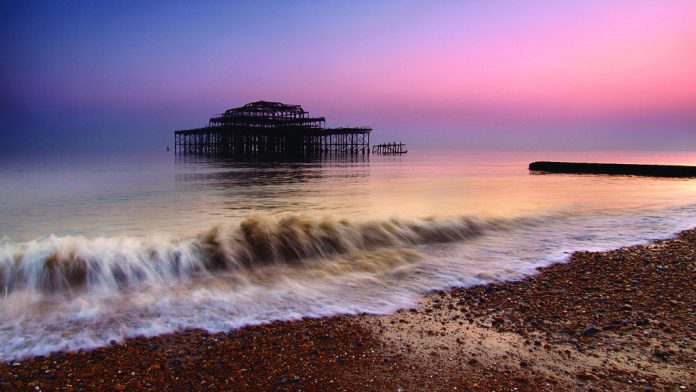 The West Pier Trust CEO suggests that there could once again be a second pier in Brighton within a decade but acknowledges that there is “no future” for the existing structure.

Brighton’s West Pier, has been in limbo since it was destroyed by fire 13 years ago.

Described as a “21st century interpretation of a pier”, the new i360 tower stands on beachfront land leased from the West Pier Trust and it is hoped that the money raised from the lease could go towards the reconstruction of the stricken pier whose ghostly remnants are a melancholy reminder of the fire which destroyed it in 2003.

As the pier celebrates its 150th Anniversary this October, West Pier Trust CEO Rachel Clark repeated her hope that a new West Pier could be in place in time for its 160th anniversary.

“We hope that the success of the i360 will generate interest in rebuilding the pier, this is our long-term aspiration,” said Clark. “It’s a big aspiration, to get there will be extremely tough, but you’ve got to aim high.

“They are our tenants and the i360 is situated on what was the root end of the pier, so it doesn’t preclude the possibility of a new pier at some point in the future.”

“We held a public consultation on what a new pier might be in 2014/15, the general consensus was that people do want a new pier but they want it to be light touch and not [high] density – lovely aspirations but unfortunately rather hard to imagine in terms of financial viability.”

Clark is frank in stating that it will not be possible to preserve the existing structure of the pier: “it hasn’t got a future.”

“The ruin is declining year by year, it’s not maintained, it’s not safe, it’s not realistic to expect that to be even incorporated in anything,” she said.

“We held a public consultation on what a new pier might be in 2014/15, the general consensus was that people do want a new pier but they want it to be light touch and not [high] density – lovely aspirations but unfortunately rather hard to imagine in terms of financial viability.”

Clark states that in a few months time the trust plans to revisit the conclusions of the consultation and work to start developing plans for a development brief for the site.

“It’s difficult to say at this stage what usage will be. One idea is that it could be a showcase for high-tech research, but whatever it is, it will have to be low density and the activities on it are bound to be virtual.

“We are very impressed by what they have done at Hastings Pier, although that model is completely different from the West Pier since they started off with a sound substructure and our site doesn’t have anything like that.

“I have to say what they’ve done there is really excellent, and to have that flexibility is a very good thing since it’s hard to keep up with changes in leisure fashion.”

The West Pier opened 150 years ago in 1866. During the opening ceremony it was poetically described as a “kind of butterfly upon the ocean to carry visitors upon its wings”. Designed by the Victorian architect-engineer Eugenius Birch, it was one of many elegant Victorian pleasure piers that contributed to the appetite of the 19th century public for seaside pleasure trips, supported by the growth of the railways. While in its heyday it attracted as many as two million visitors a year, it began to spiral into decline in the 1960s and could not compete with the nearby Palace Pier. Despite its Grade I listed status and numerous attempts to save it by the West Pier Trust, it began to collapse into the sea and its death knell finally came after two arson attacks in 2003.