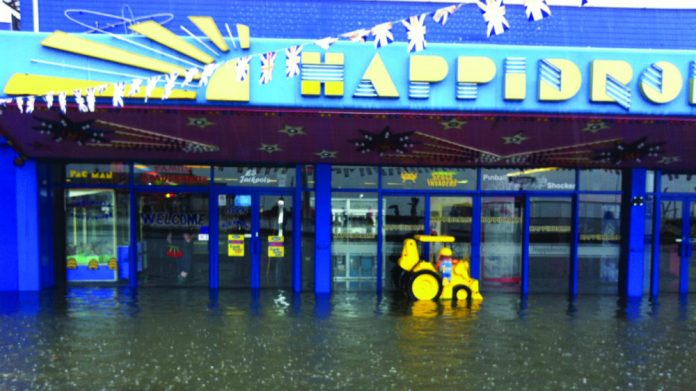 Flood-hit seaside operators may not find much comfort in new proposals to tackle extreme weather events, according to campaigners.

The government has launched a £12.5m scheme to improve temporary flood defences across the UK as part of its review of how to respond to extreme weather conditions.

The National Flood Resilience Review was prompted by serious flooding experienced around the country in recent years, which has caused disruption to amusements operators in many seaside resorts.

However, the new measures it introduced have been criticised as “a drop in the ocean” and an “Elastoplast” by campaigners and victims.

Dr Stephen Gibbs, chairman of the Carlisle Flood Action Group, suggested the Environment Agency (EA) was not equipped to do the job of tackling flooding and said the issue required a change in approach.

The Huddersfield University lecturer, who has twice been flooded out of the Carlisle home he shares with his wife and two children, commented: “Flooding is the biggest threat to life and limb in the UK since World War Two.

“The Environment Agency have a pattern – they have a flood, they have a review, then they get out the Elastoplast and hope for the best until the next flood. Temporary flood defences are part of the filibustering that the EA are having to do.

The review allocates £12.5m for new temporary defences, such as barriers and high volume pumps, at seven strategic locations around the country so that by the winter, the EA will have four times more temporary barriers than last year.

It also outlined a new stress test of the risk of flooding from rivers and the sea in England. For the first time, Met Office forecasts of extreme rainfall scenarios will be linked with EA modelling to provide a new assessment of flood risk.

Environment Secretary Andrea Leadsom said the government would invest £2.5bn up to 2021 to reduce the risk of flooding.

Friends of the Earth campaigner Guy Shrubsole explained his scepticism: “This review suggests a sea-change in government understanding of floods, but its recommendations are a wash-out.

“£12.5m for temporary flood defences is a drop in the ocean when the review concludes that winter rainfall could increase by up to 30 percent in future in parts of the UK – signalling politicians’ acceptance that the climate is changing radically.

“This is a huge increase in rainfall on top of the unprecedented extreme weather that caused such suffering last winter, and will put thousands more homes and businesses at risk.

“Yet the review ducks a commitment to higher long-term investment in defences and contains nothing on working with nature to reduce flooding, such as planting trees. These are challenges Andrea Leadsom must now address, or many more households will face the misery of flooding in future.”