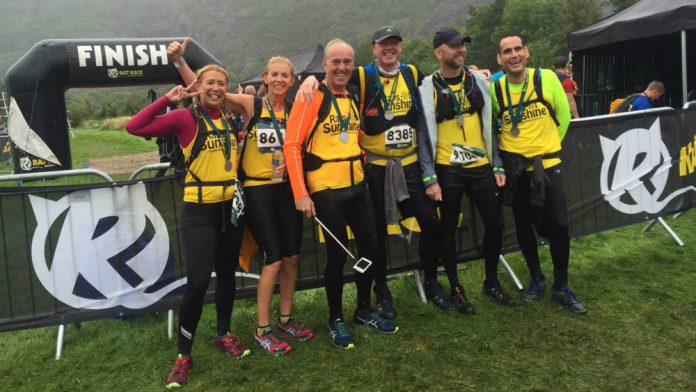 Team Muddy Hell Fire overcame a gruelling 22 mile run up and down Mount Snowdon to raise money for Rays of Sunshine Children’s Charity.

Last year the Muddy Hell Fire team took on the Mudder Challenge, running 44 miles and tackling over 260 obstacles over the course of three events to raise funds for the Rays of Sunshine charity.

The charity exists to fulfil the wishes of terminally or seriously ill children, between the ages of 3-18 in the UK. It also buys equipment for these children and support the hospices, hospitals and specialist schools that care for them.

For this year, on 3 September Team Muddy Hell Fire set off from Caernarfon Castle in Snowdonia and ran for 22 miles, on the way they had to climb and descend Mount Snowdon, the highest mountain in Wales and England, as part of the course.

“In awful weather conditions we took on the mountain and brought home the medals,” said Peter Davies, MD of Playnation. “It lived up to its billing as ‘Brutal’ but team Muddy Hell Fire smashed it.

“This has been an amazing event that has dominated our lives and taken months of training and last minute physio sessions for two of our team who picked up late injuries.”

On the day a combination of 65mph winds, torrential rain, low temperatures and poor visibility meant that summit conditions were too dangerous for the team to reach the top  of the mountain but the organisers changed the route to just below it, extending the distance and ensuring that the ascent and descents were as tough as originally planned.

The course also featured a series of extreme obstacles, including a leap of faith into a flooded quarry followed by a swim through submerged cages, and a 1km run up vertical steps.

“Unfortunately the weather didn’t stop the vertical KM which was pure evil after 20 miles of hard running,”  added Davies. “The quarry leaps and swims that followed where required to dull the burning in our thighs and the finish line climbing walls didn’t stop us from crossing the line together, weary, wet, cold but very proud.”

Davies stated that while the team have passed their target, raising over £5,000 for Rays of Sunshine, there is still time to donate at: