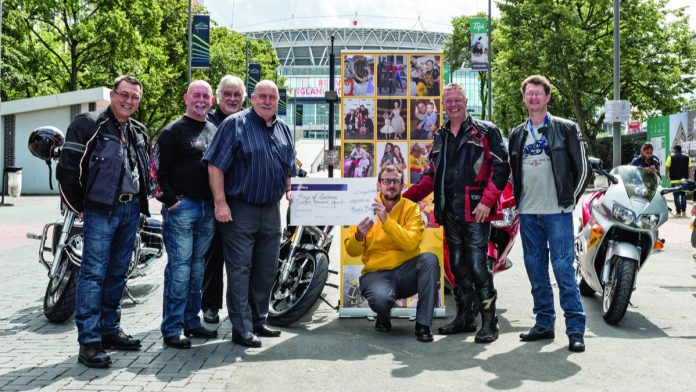 The Bacta Bikers descended on London to present the fruits of their most recent journey, as founder Dave Orton bid farewell to the industry’s most colourful fundraising group.

Motorbike fundraisers and trade body stalwarts, the Bacta Bikers, took to the streets of Wembley this past week to present Rays of Sunshine with the money gathered on their most recent excursion. The London outing was also the last bow for Dave Orton, the man who founded the Bikers in the early 90s and who is now hanging up his leathers at the age of 73.

The bikers were delivering the fruits of their recent cross-continental trip to the headquarters of Novomatic and Gauselmann, who combined in equal measure to donate E20,000 (£17,062) to the good cause.

The voyage to Germany and Austria was the the 13th such fundraising journey in the group’s 15 year history, and now sits alongside such feats as travelling from Lands End to John O’Groats in one day and visiting each of the Normandy Beaches. With Orton stepping down, leadership of the Bikers passes to Andrew Murden, who has been a member of the group since it was founded in 1991. After the Rays of Sunshine presentation, Murden spoke warmly of his predecessor: “Dave, you have put in such a great innings without which we would not have the joy of being part of this great group of bikers.

“It’s been a privilege and a pleasure working with you, coming up with ideas that most thought were mad, but which have led to the Bacta Bikers raising in excess of £180,000 to help those less fortunate than ourselves.

“We owe you big time Dave, and can only wish you well in your future ventures which I know will be aimed as always to helping those in need.”

For his part, Orton was keen to stress that the bikers would be in good hands under Murden’s stewardship and was eager to praise the work of organiser-extraordinaire Tony Slater, who was unable to attend the cheque presentation, but who continues to play a fundamental role in planning the biker’s trips. One of Murden’s biggest challenges will be to bring in new members. By their own admission the membership of the Bacta Bikers is ageing, and the group are keen to recruit new riders of all ages before their next fundraising adventure.

However, with both the good works they do for charity and the clear camaraderie among the gang on show this week, it seems very likely that some of the industry’s other motorcycle enthusiasts will be bidding to join the team on its next caper.